Today was the pen show! What a day. I had heard so much about this year’s new, larger venue and everything expected, and it was bustling and humming the entire time we were there. There were one or two moments where I said to Jon, “I’m going to mention this in the blog!” but I was so excited that I didn’t write it down, and now those moments are forever gone. 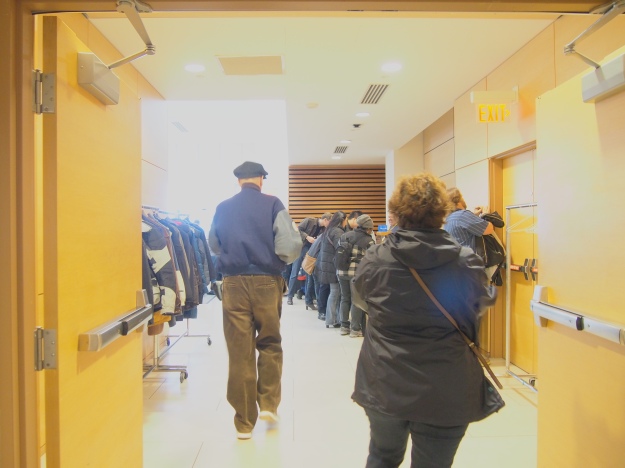 The entrance to the pen show. Coat rack almost full on the left – obviously for people who managed to arrive early enough to have time to hang up their coats. For the likes of a late starter like me, no time for coat checking! Someone might be buying up all my pens before I get there!

It was busy! There were moments I had to peek around or come back to tables (a few times!) or use my elbows while smiling-oh-so-graciously. Just kidding, no elbows 🙂 I was wearing Caleb while we were at the show – some referred to him as a human shield, and some suggested we encourage him to be a bit noisier to clear some space around the tables. I must say, though, throughout the entire time we were there, Caleb was pretty good! He was quiet and calm, not a peep while he was looking around, maybe from all those hours in the shop, listening to pen talk.

The front part of the pen show, the smaller half. 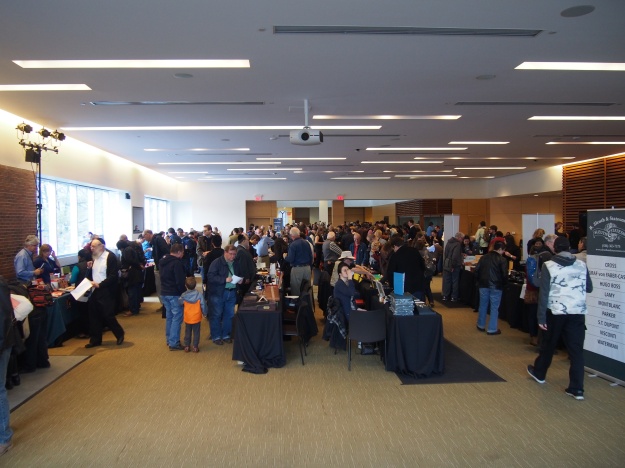 Pen show, back/larger half. I’m standing on the stage. 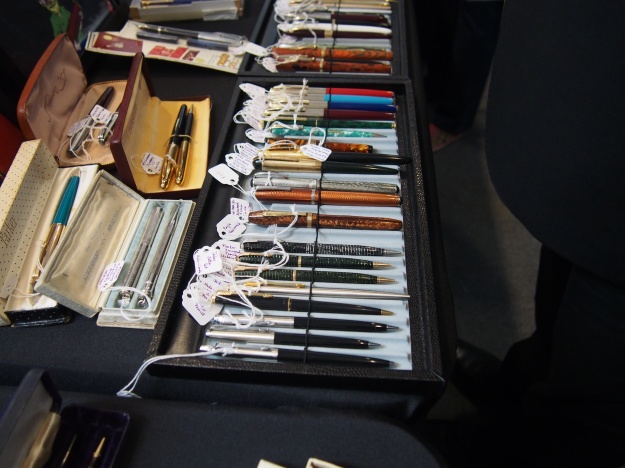 Akkerman ink sampling. We are thinking of these inks…any thoughts??

KWZ Show Ink Red Maple! I managed to grab one of the last few bottles! I’m normally not a red ink person, but how could I resist a Scriptus Toronto Pen Show Ink??

The friendly folks at Voreia who represent Kaweco in Canada – Will + other Kaweco guy whose name I didn’t quite catch but who is very helpful and knowledgeable + a great pen display which I think we’ll need to bring in.

Managed to grab this busy guy, Philip Akin, one of the show’s organizers, for a quick photo.

Bumped into a customer who bought his first Pilot Metro from us, still in use!

“Mama, please! One day, I will need my education fund…”

Mark Lurz, our phenomenal calligraphy teacher, and also president of the Calligraphic Arts Guild of Toronto.
“Hi Mark! Would you pose for a photo?”
“Oh sure, of course. What would you like me to do?”
“Do you want to pretend to be writing something?”
“Liz. I do not need to ‘pretend’ to write.”

One of our favourite friends, Ann, holding a beauty of a set that I hope she got to go home with 🙂

Some Pilot things, and I got to meet the great folks from Crestar.

It was a terrific show. It was amazing to see the pen community here in Toronto and Canada and all these people interested in pens and writing and inks. It was even better to bump into a few familiar faces and a few new faces from vendors and names we’d only seen on Instagram or from the shop. I loved seeing what pens people got, because really, it’s such a personal thing, and sometimes you see the pens they found, and you think, “that’s exactly the pen I would imagine you would get!”

We had to duck out a bit early, we wanted to open up the shop for just a few hours for anyone that might want to say hello and see the new place. That was also great because it was a bit of a quieter opportunity to chat and show off new acquisitions. New pens, warm egg tarts and old + new friends.

I got this beautiful Parker, that I mainly bought because I think it’s gorgeous, and it’s also the perfect size for my hand. I’ve left it with pen expert Jeffry Fridfinnson to tune up a bit and maybe fix up the nib. I sometimes think I like modern pens because they’re built so tough, and they hold a bunch of ink, and they’re mostly indestructible, but then I see an unusual and subtle and beautiful finish like this one, and I’ve gotta have it. And even better, it was made in Toronto! It has some engraving in it, but I didn’t have a lens that could zoom in, so no pics – yet. I’m a bit heartbroken that I don’t have this pen with me now to ink up and play around with, but good things come to those who wait!

Pooped out, five minutes before we get ready to leave…

I remember wondering how the baby would handle the change of time with daylight savings, but we have been blessed with a fairly easy going tyke, which continues to surprise everyone who knows Jon and I, considering our combined crankiness and irritability with change. In the morning, I figured I would try keeping him awake for the car ride over and he would sleep through the entire show, but when Caleb wants to sleep, he is pretty determined to sleep, so he got about twenty minutes in the car. He then spent the majority of the pen show awake, looking off into all the strange noises and new faces. Caleb conked out just before we were about to leave, but he only slept for around twenty minutes before we made it back home, so he had a rockstar nap in the afternoon.

All in all, it was a day. We talked on the way home and over dinner about whether or not we’re going to try and exhibit at the next show. I can’t imagine all the work it takes to get everything together, hike it down to the city centre, and set it all up. Last year I said, ‘No way, with a newborn.’ This year, I said, ‘A one year old! Even worse!” Next year, Caleb will be two, but maybe…

Attempting to get a picture of the three of us together, and managing to get no one looking at the camera. Can you believe I’m the photographer for this business?? 🙂

All this talk about next year and things to come, and it’s crazy and great. It’s so exciting to see these incredible events take place and to know how many people there are in this community. It’s amazing to think we can walk around and bump into old familiar faces who pop by the shop every week, or online people we’ve never met stopping to introduce themselves and say hello, and to see and meet vendors we’ve been e-mailing and calling for so long.* Whether it’s through the vintage pen market or the calligraphy guild or the inky folks or Pen World Magazine, or the distributors, or the ‘regular’ people who are just pen nuts, what a great community of people.

Someone we were chatting with said that this pen show here in Toronto isn’t quite like any of the others in the US, there’s just something about it, and while I haven’t been to any, I have to say that I think this one is something special. I can’t wait for next year, whether or not we manage to get a table. But even before the 2016 show, there’s so much to come! 🙂

*Marie and the folks at Crestar, who distribute Pilot, are some of my favourite distributors, and even though we’ve been e-mailing so long, this was the first time we’d met! Of course we had to make one of our first stops the Pilot table, and Marie gave me the greeting kiss on both cheeks. Then she gave Jon the same, but Jon was unprepared, and just after we left the table, he turned and said to me, “I just almost kissed Marie on the lips.” HAHA!