A brief refresher on Wonder Pens history: a few years ago, we opened a bricks and mortar shop at 906 Dundas West. I was there full time for about a year and a half until we had the baby – then Jon took over most of the shop stuff, and I was a bit more sporadic, mostly staying at home with the baby.

Just this past year, we moved into our new space here at 250 Carlaw, where Jon is still usually the guy in charge, and I’m mostly just stocking shelves and sweeping the floors while the baby is napping.

Oh, 906 Dundas West, the days of boxes stacked up in the front window…

This is to explain that way back in Wonder Pens early days, I used to see and know all of our customers. I would talk to Jon about them and say oh yes, Philip came by and picked up that thing we special ordered, and told me this funny story about his car stuck in the snow, etc. I would know this customer’s nib size, and that this customer had previously purchased this but was now looking for that.

After Jon started taking over, he started coming home to tell me these stories about “our” customers. I started moaning that I was missing all the customers coming by.

At first, the customers would start with:

“Who are you and where is Liz?” and then it turned into..

“Hey, Jon, say hi to Liz for me” and then it turned into…

and they would forget all about me.

Jon would tell me about these new customers I’ve never seen before, and I would say, “Who is that?” and he would say, “Oh, you wouldn’t know…”

One of the many customers we have been competing over is Nigel, mainly because Nigel used to come quite a bit when I was around, but now comes when Jon is around. I like talking to Nigel because he knows a lot about the city of Toronto and urban planning stuff, and I’m secretly hoping one day he’s going to give me the inside scoop on where the next best deal in Toronto real estate is.

Here are three things that drives me crazy about Nigel, but also make him one of our quintessential Wonder Pens Friends:

3. Jon came back to the apartment one day and said, “Nigel dropped off something for you. It’s some notebook or something.” From somewhere, Nigel had unearthed this beautiful, vintage notebook. A notebook! Old! Already filled up with secrets from the past! My kryptonite.

I opened it up, and it’s an agenda from 1916! Called the Excelsior Diary, my superficial googling has revealed that these Almanac-type books were mostly kept by men, and sized appropriately to be slipped into a pocket. I guess this is one of those habits a bit lost these days.

Almost all of the days are filled in by some faithful recorder of the past, mostly with details of the weather and daily events.

The best parts, though, are the informational pages at the front of the book (even in 1916, agendas included all sorts of information to help you get through life). There’s a monthly calendar with daily moon phases and sunrise times, rules for computing interest and a table to help you calculate your income on stocks, a list of American Presidents with their birthdates and native states, and a table of currency exchange, among many others (obviously before the days of smartphones).

But here are some of my favourites:

Table of Poisons & Antidotes – this is a crazy table of potential poisonous ingestions including: ‘Acid, Carbolic’ and ‘Acid, Hydrocyanic’, and also Arsenic, Copper Sulph, ‘Illuminating Gas’, and all sorts of things I’ve never heard of, like Digitalis, Hyoscyamus, Aconite… 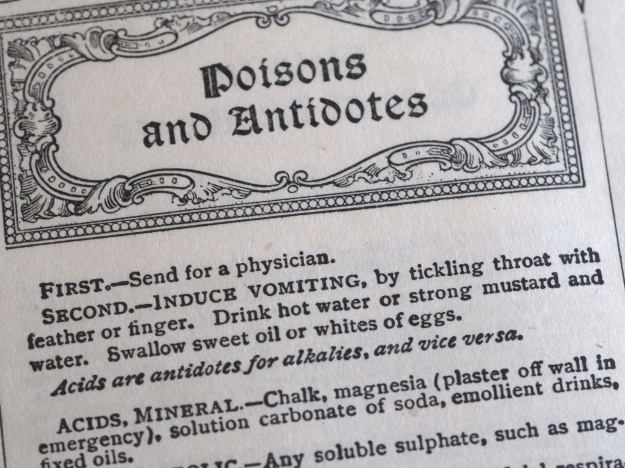 First. – Send for a physician. Second. – Induce vomiting by tickling throat with feather or finger.

Another great one: Help In Case of Accidents.

Including recommendations in case of drowning, various types of fire (in one’s clothing, in a building, from kerosene, burns & scalds, etc.), suffocation from the previously mentioned illuminating gas. 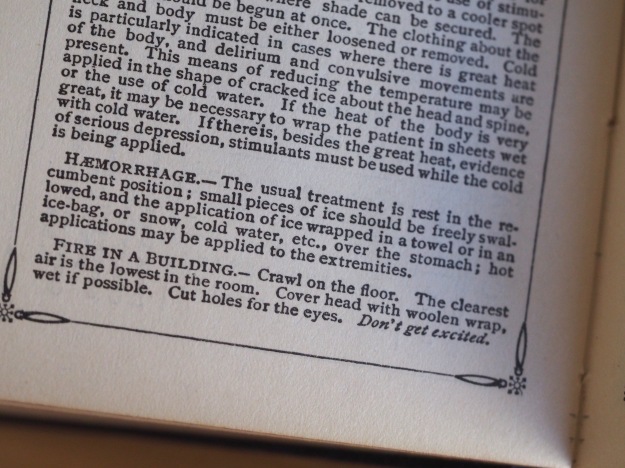 Fire in a Building: Cover head with wooden wrap, wet if possible. Cut holes for the eyes. Don’t get excited.

Living in these dangerous times is offset by the price of postage.

Imagine these postage rates! These are in USD, but even with exchange into CAD, I’m pretty sure these would still be a steal 😉

Jon maintained he only vaguely liked the notebook, but I could tell he was secretly impressed.

“I don’t know why he gave you the notebook, I’m the one who sold him the Metropolitan.”

6 thoughts on “Wonder Pens Friends: Nigel & the Excelsior Diary of 1916”