We often get asked about what sort of maintenance a fountain pen requires. I think the idea of paying relatively so much for a pen (compared to disposable ballpoint) and then having to do work to keep your fountain pen writing can sometimes be a bit daunting, but the good news is that there’s really not much to it!

There’s a lot of stuff out there showing how to take apart your pens and using pen cleaning solutions and ultrasonic baths and q-tips and bleach, and this is helpful stuff, especially if you get something really sticky trapped in there, but for the most part, it doesn’t always have to be quite so complicated, because…

The golden rule of keeping your fountain pens flowing magnificently is to use them all the time.*

In fact, you could stop reading now, and if you follow this general rule and use your pen all the time, I’d be fairly confident you’d be okay for the lifetime of the pen. Pens were made to be used! 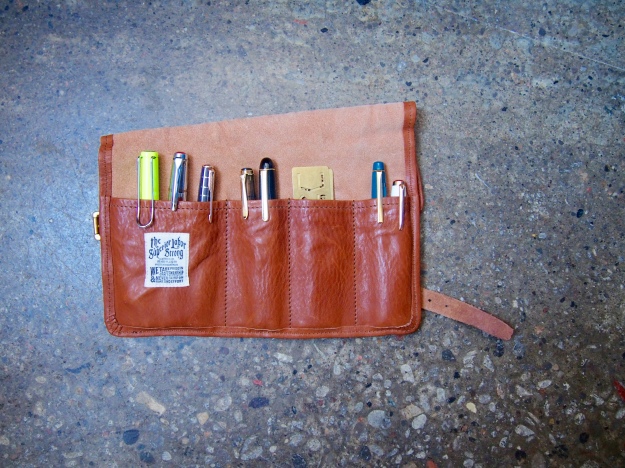 The people that never (actually never) clean their pens are generally people that use their pen everyday, and they usually refill from the same bottle when they’re running empty. Sometimes they dip from different bottles, which is a bit dicey, but not the end of the world.

The more you use your fountain pens, the more ink will constantly flow through the feed, acting as its own sort of flush, and the less chance there will be for the ink to dry up or to get clogged in your feed. Use fountain pen ink, not India Ink or calligraphy ink.

However, a good cleaning every once in a while is not a bad idea. Here’s when you should clean your pen:
1. When you’re no longer going to use it (for more than two or three weeks). Clean, leave nib down into a paper towel or cloth in a cup to dry overnight, store.
2. When you are changing ink colours from a bottle of ink.
3. When you notice there’s a change in flow.

It’s also not a bad idea to try and flush water from both directions, both pushing from the back of the pen out the nib, and drawing water into the pen – this helps dislodge any tiny bits of ink from crevices of the feed from both sides.

One tip on really cleaning your pens out with just water (because water really is the best thing to clean your pen with) is to flush it out the best you can, and then fill it with water. Cap it, and leave it overnight. In the morning, you may find that the water has slowly dissolved some of the residual ink from the feed, or maybe even from inside the converter or piston. Flush it out one more time.

When re-filling from the same bottle of ink, I sometimes do a light flush or two with water, and then refill. Sometimes I don’t flush and just refill.

When re-filling from a different bottle of ink, I often do a more thorough flush, but I admit that I occasionally leave a small trace of an old ink behind.

When putting a new cartridge in of either the same or a different colour, I don’t find it necessary to flush at all, but it doesn’t hurt. If you don’t, you’ll get some pretty cool gradient colour changing.

I also like to live life on the edge, so I have very, very occasionally refilled a cartridge or converter with a syringe of a different ink from a sample vial or bottle, without flushing or cleaning the pen at all, and then putting the converter back in and seeing what happens. This is generally frowned upon, as you never know what kind of reaction you can get by mixing inks, so I definitely don’t recommend it in a more expensive pen that you care greatly about. One day my pen may spontaneously ignite and my neon lime ABS plastic will all melt away, but until then…

If you are going to mix inks, the best idea is to mix in a separate vial and let it sit overnight to see if any precipitates form or it gels up.

At the very least, the thing to keep in mind is you want to try to avoid contamination in your ink bottle, so make sure your nib is clean before dipping it back into the bottle.

This is a pretty general primer, without a lot of how-to’s and details, and that’s because I think for the most part, that’s all you really need. The focus is not so much that your pens need to be hyper sterilized, although of course who am I to say no if someone is going to offer to do that for me. Pens were made to have ink in them. In fact, you may even notice some residual ink already in your brand new pens, such as your Lamy pens, that’s left there from factory testing.

The point is that your pens just need to be clean and happy and writing well in order for you to be the same.

*In addition to the golden rule of using your pen all the time, use common sense all the time. For example, don’t put paint in your pen and expect it to write.