Another busy day, but much to my delight, as the evening sun sets, I’m writing this blog post from the couch!

We’re finally getting around to the packing and office area a bit. With the priority to get the shop open for business, and the apartment liveable for cooking and laundry and basically turn it into a giant play pen for the baby and dog, the packing area has been neglected. It had turned into piles of boxes of stock half opened and tools for the minor projects that still need to get into place and printers stacked on top of filing cabinets, but the last heave-ho in this crazy move is to finally start opening up and sorting the boxes. We’re not quite 100% yet, but at the very least, we’ve cleared off enough space to move the couch into it! I would take a picture to show you, but it’s basically a couch …surrounded by boxes. 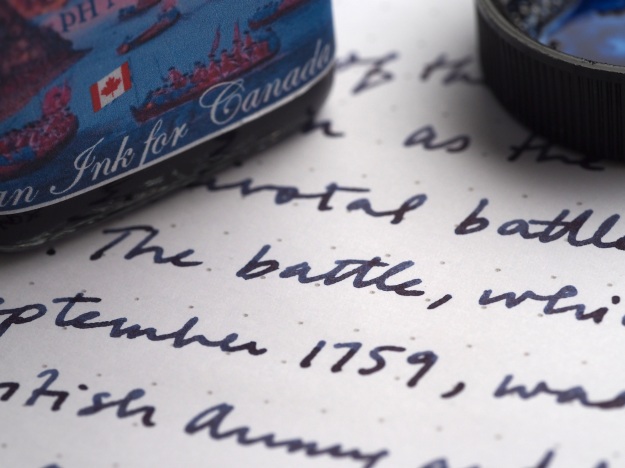 The big news, however, is the arrival of two brand new inks from Noodler’s! If you’ve been following us on Instagram, you might have seen a snap of a new ink that’s come into the shop. Jon tells me I need to stop sharing things that we aren’t ready to actually post for sale yet, but I couldn’t resist! It’s like starting a bag of chocolate almonds, there’s no self-control! I made a big mess of static-clinging styrofoam peanuts digging up these inks and have been playing around with them ever since.

I’ll be sharing more about the second one soon enough, but the first one we’re releasing is called Blue Upon the Plains of Abraham. 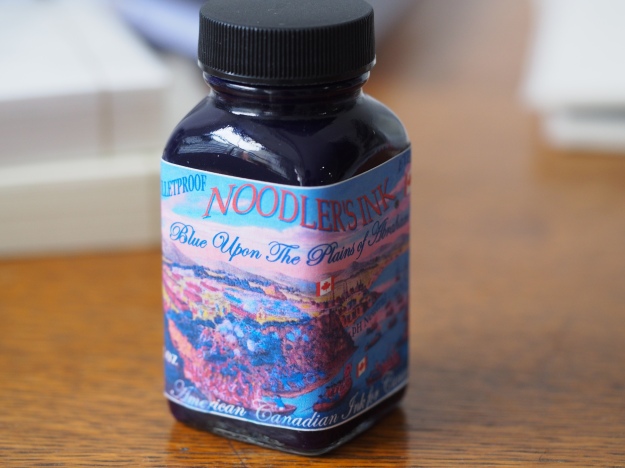 This Canadian ink (what a wonderful phrase!) was originally formulated and released several years back, but had been discontinued. The formula for this current ink has actually changed since it was originally created and produced, I think because of some changes in availability for the raw materials. The original ink I think had a bit more of the purple hue visible, but unfortunately I don’t have a bottle of the original to compare.

This ink was inspired by and named after the Battle of the Plains of Abraham. I almost wish I was still teaching so I could bring this ink in as a teaching tool. I literally taught the Seven Years’ War to my students in Grade 7 History, although I don’t know if I’m glad or not that my students aren’t here for me to quiz to see how much they remember…

To sum it up, in the early days of Canada before we called ourselves Canada, the French had laid claim to the land, and had made good relationships with the Native Americans to survive and thrive. Of course, the French and British were fighting each other to take over the land in the 1700s. The Seven Years’ War, including this Battle of the Plains of Abraham, was a turning point in the British taking over against the French. This was important in the ending of “New France” and the beginning of “British North America,” which obviously has had a big impact on Canada today.

The label is the scene of the battle, with some Canadian flags waving around for posterity (the red and white Canadian maple leaf flag obviously had not yet been created).

I believe Nathan Tardiff, the creator of Noodler’s inks, actually has some French Canadian blood in him, which is why the bottle says “American Canadian Ink for Canada” along the bottom of the label. 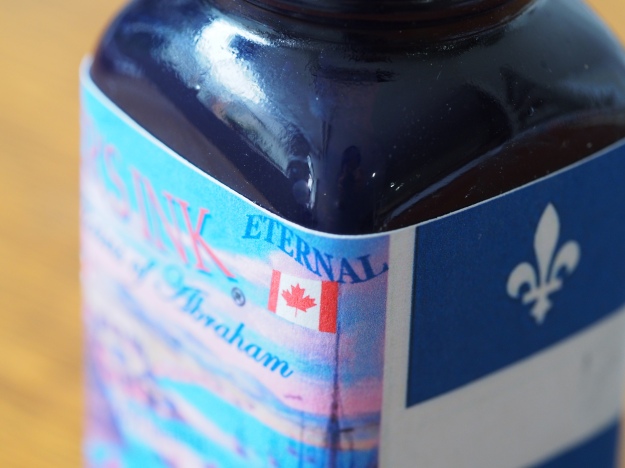 This is a bulletproof and eternal ink, so it’s going to last against water, bleach, sunlight or coffee. I’m not sure that you always “need” a bulletproof ink, or even a completely waterproof ink, since most ink will survive the occasional spill of tea, but it’s a bit of a bonus that this ink is bulletproof, and pH neutral. 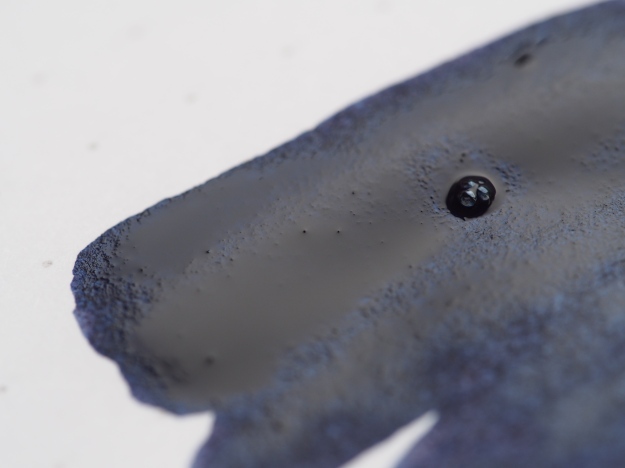 This is a beautiful ink – the colour goes on like a sort of warm, rich blue, but dries to a dusky blue/grey/purple with some really amazing shading. 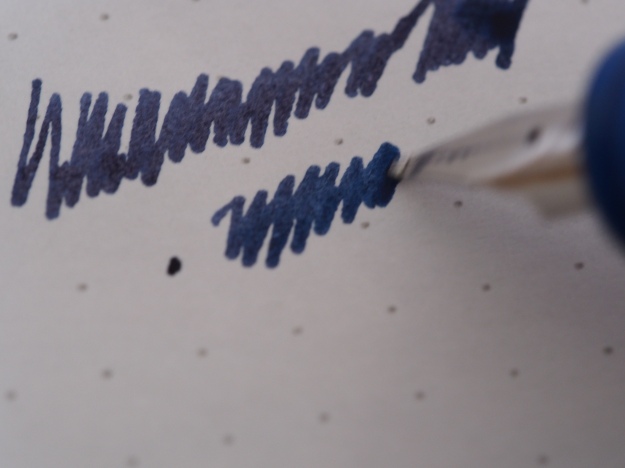 I tried to get a picture to show you the blue it starts out as when it’s wet, compared to the more dusky blue-purple it dries as, but it is really, really hard to take a picture in focus of the writing, while writing. I also tried to convince Jon to come and help me, but he claimed his giant ogre paws were just going to get in the way, so I was left to my own devices. The above was the best I could do, but there are more (and I hope better) photos below of what the ink looks like dried.

The writing sample is on Rhodia 80 gsm paper, with a Broad Nib from Lamy. 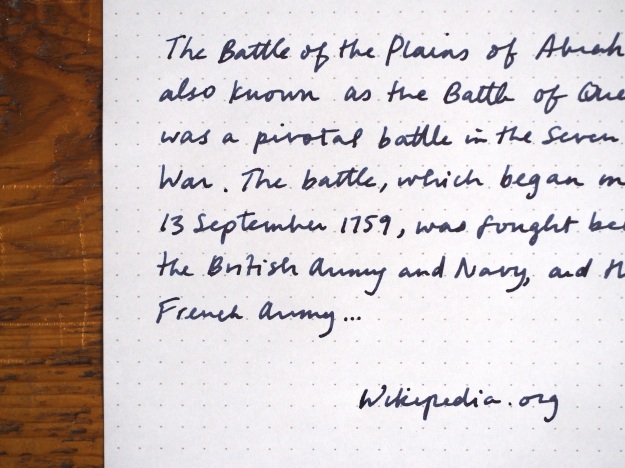 And of course, the really great thing about this ink is the shading. I may or may not be addicted to inks that shade. 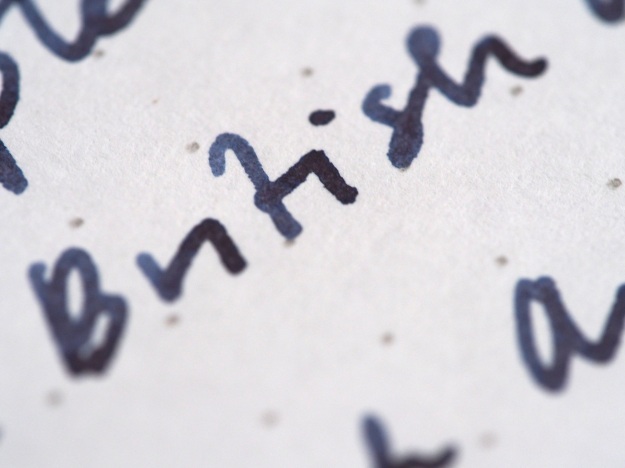 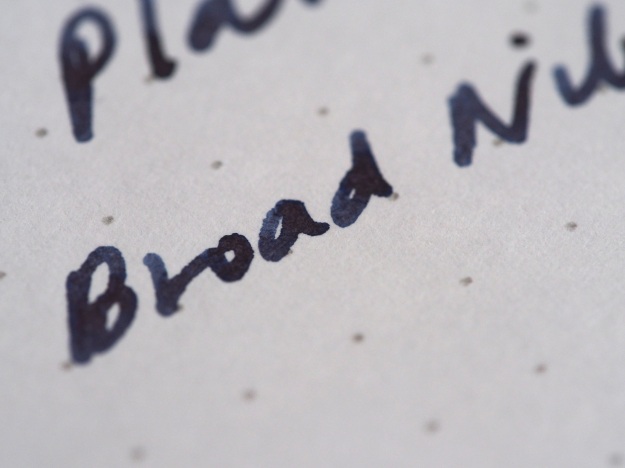 Even in a Fine Nib (Lamy) you can see some shading. 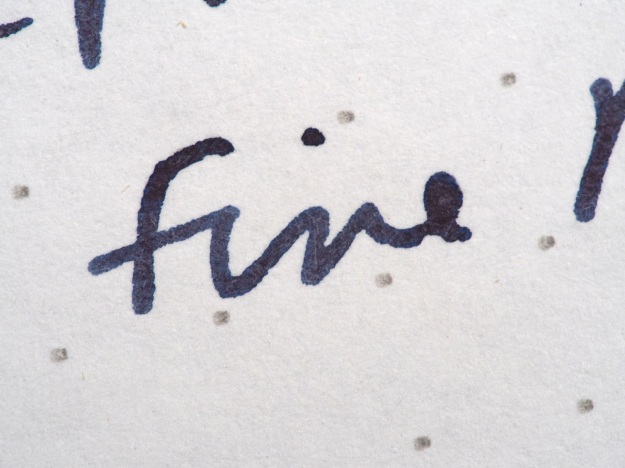 I love everything about this ink! I’m surprised it was discontinued, because it’s a bulletproof dark blue, it’s smooth and wet which helps it shade, and it shades so beautifully. The dry time is pretty good, and the ink doesn’t bleed through any more than expected on cheaper papers like copy paper, just a bit of light spotting. It’s great on Rhodia or Clairefontaine papers (of course!).

The colour, though, is what makes this ink so special – it’s this dusky, warm blue with just a hint of purple, and with so much character because of all the shading. I guess I have a hard time saying no to any ink that shades, but then when you tell me it’s a Canadian ink?? 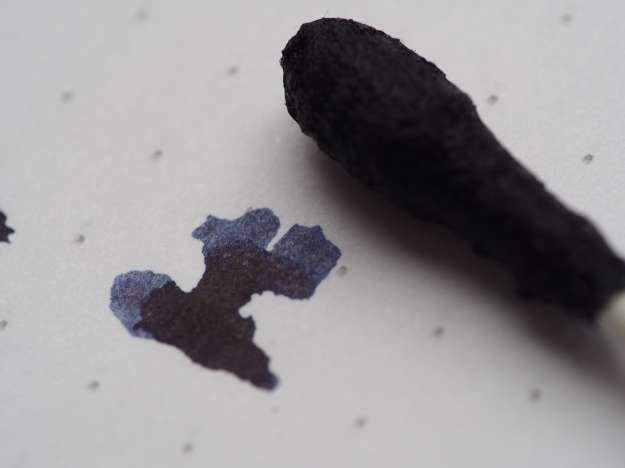 This ink, Blue Upon the Plains of Abraham, was created for the Canadian market a few years back, and I’m not sure why it was discontinued. What I do know is that we invested quite a bit to revive this ink, as there are some pretty steep minimum quantities to get an ink back into production after it’s been discontinued, and of course there are some volume requirements to keep it going.

I know we’re a pretty small market here in Canada and I think sometimes, especially dealing with international or American distributors, we sometimes feel teeny tiny compared to the big guys, but I do think the ‘fountain pen scene’ is changing and growing here in Canada, and I’m really hoping there’s enough interest in these sorts of Canadian exclusives to keep them going. Jon and I were a little nervous about taking on an ink like this, but we’re pretty excited for the opportunity. I mean, we’re small, but scrappy. And we’re, you know, sort of passionate about our pen and ink, too 🙂 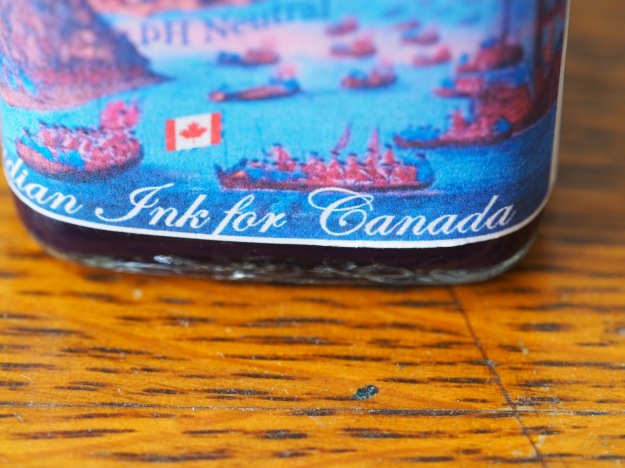 This ink was made for you and me!!

Elsewhere on the web:

*We are a small business that focuses on shipping within Canada, due to very high shipping rates internationally. However, we’ve been thrilled with the international interest in this ink. Understanding that this ink is currently only available from us, if you are interested in purchasing a bottle and are located outside of Canada, please send us an e-mail for a shipping quote to your location!