J. Herbin has recently released its newest ink in the 1670 Anniversary Ink line-up Emeraude de Chivor, joining Rouge Hematite, Stormy Grey and Bleu Ocean. The reason these inks have been so popular is because they all have some beautiful gold shimmer in them. It’s pretty rare to get gold flakes in fountain pen ink since most ink is dye-based, and often inks with pigment in them can clog your fountain pen, but these J. Herbin formulas flow well and wet and smoothly.

Each of these previous releases had been highly anticipated, and Emeraude de Chivor is no exception. Its arrival to North America has been discussed on forums and pen blogs and Instagram for the last few months, and we’ve been fielding our share of e-mails and questions about when it was going to arrive. I think we’ve received it here in Canada before the US, which is one of the few times us Canadians have had an edge over our friends down south. With our rapidly weakening Canadian dollar and the end of door-to-door mail delivery, we should cherish these moments, friends!  🙂 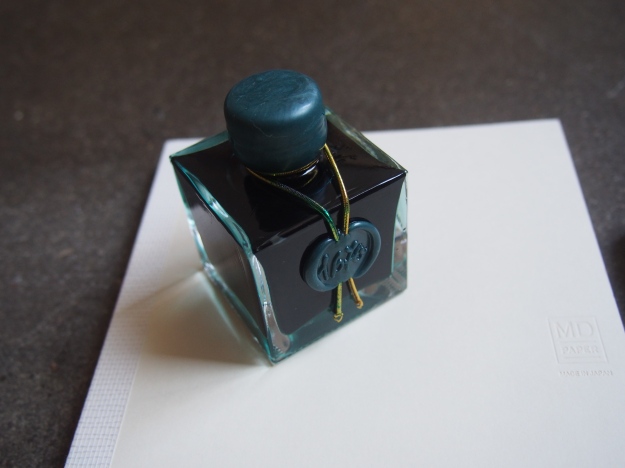 I had originally thought it was going to arrive early August, so it wasn’t even on my radar to start thinking about it. Then last week, I got an email from our J. Herbin distributor saying, “Hello Mme Chan, your ink is coming.” I love how these guys are always so calm in their emails. It’s like they don’t realize that immediately after seeing the email, I’m going to freak out a bit.

Emeraude de Chivor is a dark, rich teal with gold flecks and red sheen. I call it teal rather than turquoise because I think it leans more towards a warm blue green rather than a sky blue green, but it depends a bit on how wet your pen is (and your computer monitor…). I also referenced this site here, which I’m pretty confident in, because it’s a site about teal vs turquoise for a wedding, and women can get a bit nuts over wedding details. It’s an interesting coincidence that on this website they say teal and gold is a “fab colour combination.”

Here are some shots of the new ink. 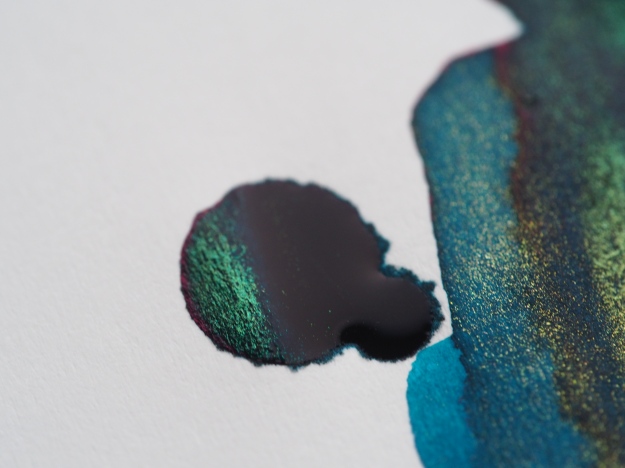 I love seeing the gold underneath the ink before the ink has dried!

Of course you’re going to see much more gold in these super wet swabs, dip pens, glass pens, or anything else that puts a lot of ink on the paper versus in writing with a fountain pen, but you’re still definitely going to see some gold, and obviously the wetter or broader the pen, and the less absorbent the paper, the more gold you’re going to see.

This shot here shows some insane gold reflection and red sheen probably because it’s the first line I wrote with my pen after filling it with the ink, so the nib and feed held much more ink, but also you can capture more sheen if you look at it from an angle across from the light.

I love that even without noticing the gold or sheen, the colour of the ink itself is this beautiful, dark, rich colour. Especially with a fine nib, with the gold or red sheen not as obvious, you might be able to get away with this in a work environment. Plus you’ll notice the sheen and gold more if you look at an angle and in the right light in any case, so maybe no one will even notice 😉

When you’re filling your pen, your best bet is get your pen ready first, piston all the way down and ready to grab, shake the bottle really well to even disperse the gold flecks and then immediately and quickly dunk your nib in to suck up. If you’re too slow, the gold will all settle to the bottom before you get a chance to get any in your pen. When we do ink samples of these 1670 inks, it’s a two person operation, one person shakes and removes the cap between every syringe fill while the other person gets the syringe in and dispenses into the vials.

I’ve found that surprisingly, these inks clean easily out of your pens. There is sometimes some gold sparkle remaining on the feed if you’re just flushing out until the coloured ink (grey, blue, etc.) washes out, which I know sounds contradictory to what I just said about it cleaning easily, but it’s not in a way that’s build-up clogging up your feed like dried ink residue, it’s just the tiny gold flakes, which will continue to come out in the next ink you put in.

That said, if you’re really concerned about an expensive or valuable pen, consider not leaving any of these 1670 inks in your pen for too long, or to really be vigilant in cleaning it out, even using a bit of dish-soap in a cup of warm water. I’m a bit more of a life-on-the-edge, and I don’t mind a bit of gold sparkle in my Ancient Copper or Alt-Goldgrun. In fact, I don’t think there are too many things in life that couldn’t be improved by a bit of gold dust.

I will leave you with a video done by Ed Jelley, one of my favourite pen bloggers.

Happy weekend! I hope you started it off with some French toast, or maybe at your local cafe. Here’s hoping there will be a little less rain and a bit more sunshine this weekend. We’re working on getting a sign for the side of the building to help direct people down the south laneway to the shop, but in the meantime, we’re just using our chalkboard sign, which keeps getting washed out in all the rain!

In all the excitement with the new Noodler’s Inks Blue Upon the Plains of Abraham (which has already sold out, but we’re expecting more in the next week or so!) and Raven Black, we’re still getting other a few other new items in, and we’ve got a few other things expected over the next couple of weeks. Remember, you can always browse the Just In section of the website to see what else is new. 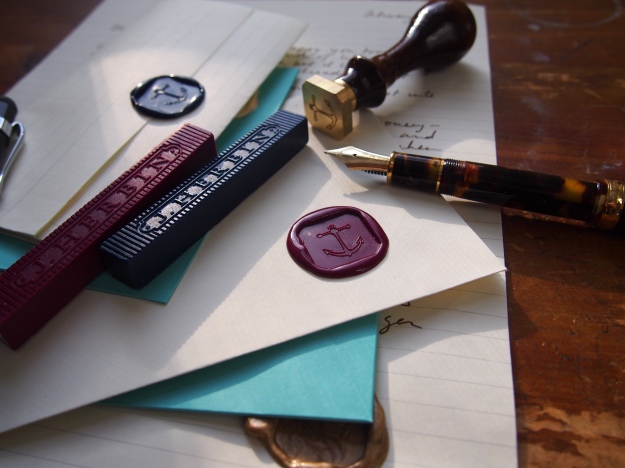 We’ve decided to carry the letters of the alphabet for the wax seals from J. Herbin regularly. It was great to see so many people interested in getting the seals, and we had been ordering them in as a special order, which meant a longer wait time. The symbols (like the Christmas tree, etc. will still be a special order). We may occasionally have one or more letters out of stock just by coincidence, but you will now be able to order them online without a wait time. If the letter you’d like is out of stock, you can sign up for the e-mail notification, and we should be restocking them regularly. The wooden handle is now also available (separately), but remember you only need one and you can switch around the brass seals.

We have two new inks – Cacao de bresil and Diabolo menthe – from J. Herbin, as well as some of their standard international short ink cartridges in their more popular colours. I have to be honest, it’s those little tin cases that got me. 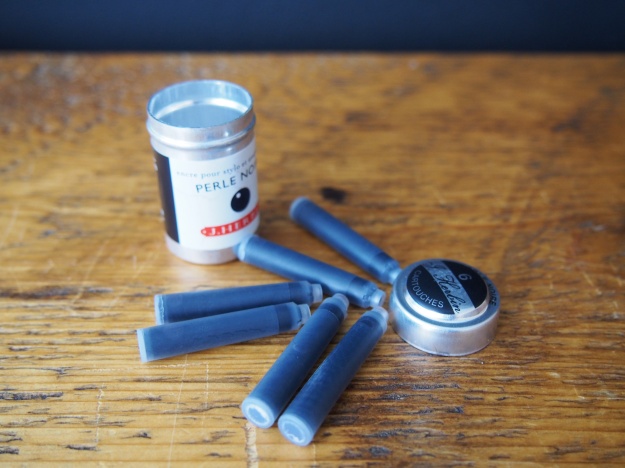 From Clairefontaine, we’re now carrying one of their sketch pads – the Graf it A4 Sketchpad, with 90gsm paper. Sheets are perforated and it has a nice thick backing for sketching while you’re on the subway or out in the wild. 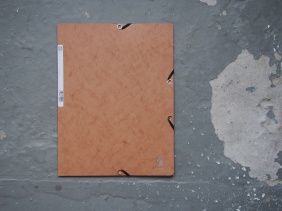 We occasionally get people coming in asking for something to hold a few loose sheets of paper together, like a file or portfolio, and this is what we’ve found! This is a great, stiff and sturdy light card folder from Exacompta with elastic straps to hold it together. There are lightly scored lines along the folded edges, so you can hold quite a few sheets of paper. Because of the elastics and the folded flaps on the three edges, you can be sure no paper is going to slide out, even if you accidentally drop it. It’s great for organizing sheets of paper, especially if you have to tuck them into a briefcase or bag if you’re traveling or moving around, and would be perfect for an on-the-go correspondence folder as well!

We’ve got Sailor inks and pens back on the shelves, including Yama-Dori, which was out of stock for a while. We’re expecting a nice Midori order in over the next two weeks, but there won’t be any Blue Midori in on that. I am hoping for more of the Blue Midori in July! Also coming soon is Diamine, and another Noodler’s shipment with the Blue Upon the Plains of Abraham re-stocked and a few other inks as well.

Have a great weekend, everyone! If you’re in Toronto for the weekend, I’ll hope to see you at our Letter Writing Club tomorrow, from 2-4 pm. Otherwise, eat some dim sum, relax and enjoy the sun 🙂

I hope you’re all enjoying this beautiful weather! The long winter seems like a distant dream/nightmare and I hope you’re wandering around outside in shorts and a t-shirt, and maybe getting some ice cream. In our new neighbourhood, Leslieville, there’s an ice-cream shop on Queen that always seems packed with people, and even a few dogs waiting longingly outside, but we haven’t tried it yet. One day, soon enough!

Jon and I are really enjoying the new space and also the new neighbourhood! I think we’re both a little sad to think about all the old regulars who lived around the corner from 906 Dundas West, and who came by to pick up an ink or a notebook but who would stay for forty-five minutes to shoot the breeze, but it’s also been a lot of fun to meet some East enders. A few people from our building, which is mostly commercial units, have stopped by to introduce themselves, and we’ve had a chance to meet some people who just live in the area. In fact, our building faces a large residential building, and we’ve had a few neighbours who have just seen us out their window, and who have come by to say hello!

Being a fountain pen shop and hanging out with people who use fountain pens all day, it’s been interesting to tell people-not-yet-initiated-into-this-wonderful-world that we sell inks and fountain pens and stationery. You’ll be pleased to know the response has been really great! Maybe because there are a lot of graphic designers and creative people around here, but instead of the “People are still using those old-fangled gadgets?” I sometimes expect, we’re getting a lot of “Wow, that’s super interesting! I’m so glad to see that there’s still so much interest in writing and these kind of tools!”

Before we moved, Jon and I discussed a few promotions and giveaways to help celebrate and publicize our move. Well, things kind of got away from us (no kidding), but we’re still celebrating!

We’re giving away a bottle of the newly released Bleu Ocean, as well as a bottle of Stormy Grey and Rouge Hematite.

These gorgeous inks all have sheen and sparkle, and are perfect for letters, greeting cards or anywhere you need a little bit of excitement in your life.

1. Leave a comment on this blog post. Say hello, which of these three inks is your favourite, how you’re enjoying the warm weather, or whatever you like!

2. Shipping within Canada only.

Have a great weekend 🙂

Wonder Pens is an online and bricks & mortar stationery shop in Toronto, Canada, run by husband and wife team Jon & Liz Chan.
Mostly written by Liz, the Wonder Pens Blog is a place to find thoughts on family and life, shop updates, and searching for inspiration for a writing life.
Loading Comments...