We’ve been missing the elastic on our display Passport Brown Traveler’s Notebook for the shop for a while now, and finally, in a spurt of inspiration and productivity, I replaced it.

I think the elastic broke because people who aren’t familiar with the Traveler’s Notebook try to put the elastic back on the cover vertically, like a Rhodia or Leuchtturm elastic, rather than horizontally, which stretches out the elastic, and it snapped. Every time I notice this, it gives me pause and reminds me about just how unique this Midori Traveler’s Notebook system is, and why it’s become so popular with so many people who need an everyday notebook and planning system.

I figured since I was opening up the repair kit, I might as well try out some of the other elastics, since the kit comes with four elastics and one new metal nugget enclosure.

I have a Regular Size Blue and a Passport Camel, and Jon has a Passport Black. 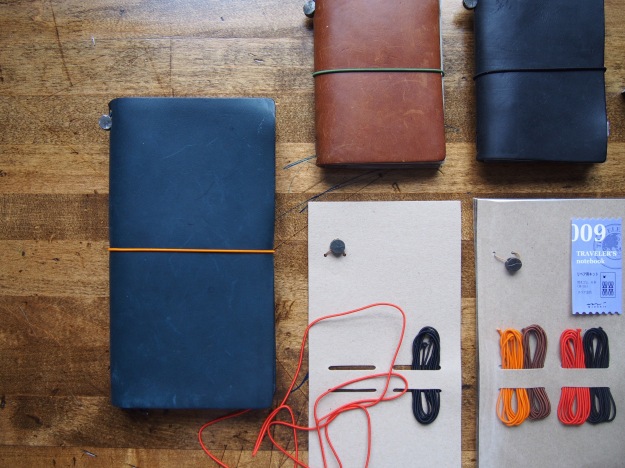 I replaced the elastic that closes my Midori with the orange one – blue and orange, one of my favourite combinations! This one is super easy – you just pull out the old one from the hole, and you put the ends of the new one in, and tie a knot. 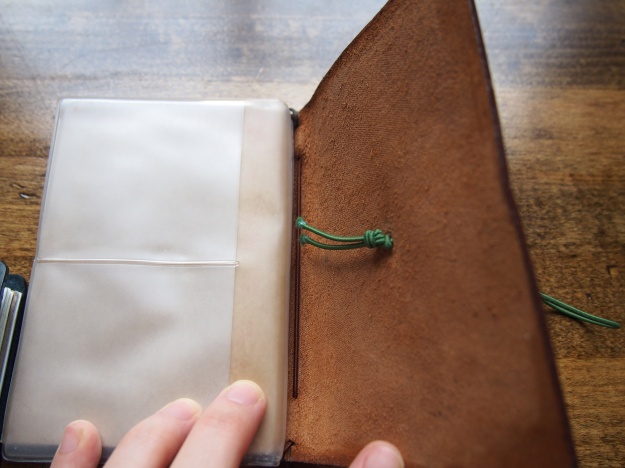 Pull it out through the inside, and slip your new elastic in! 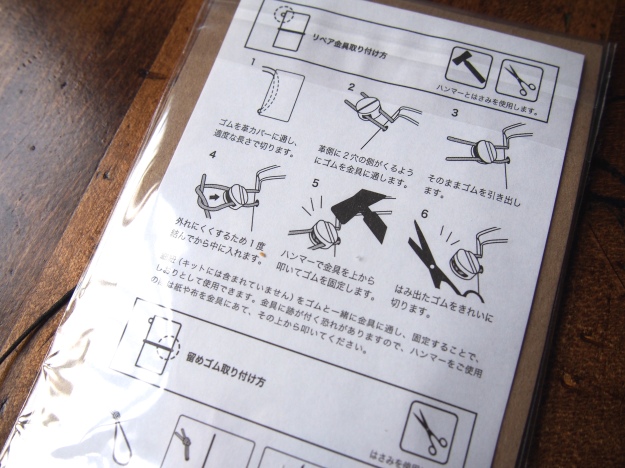 There are instructions to do this on the back that are very easy to follow (I looked at the pictures…), but here are a few colour photos. 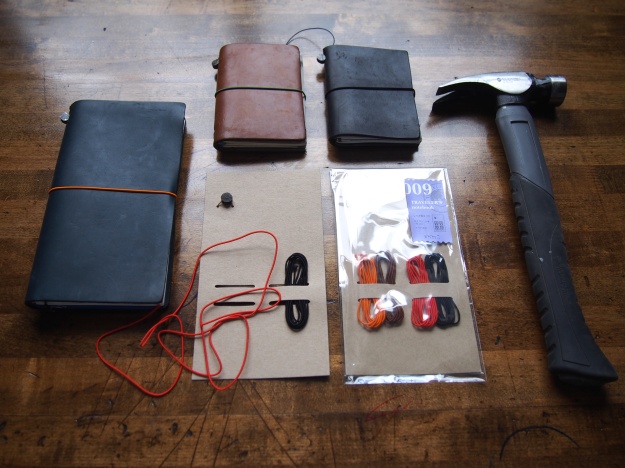 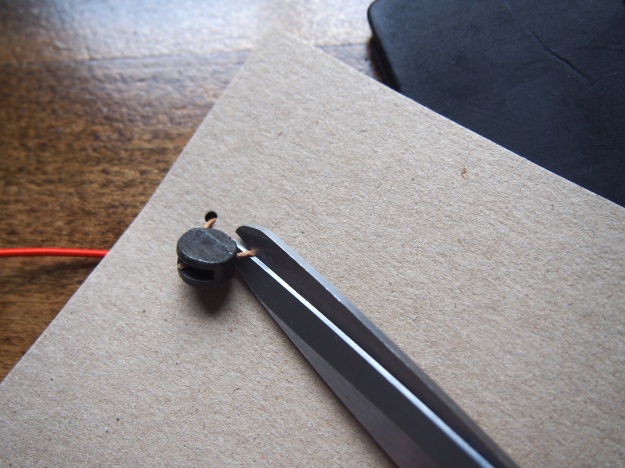 You will actually need to cut off the string holding the end cap to the cardboard. 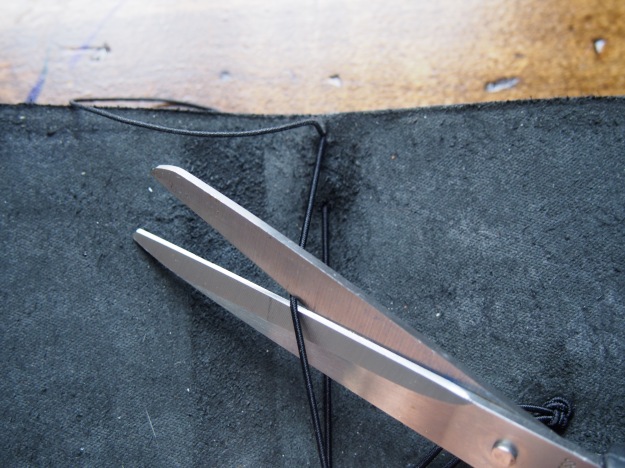 Step one: Cut off your old one. You will not likely be able to salvage this to use again as the notebooks-holding elastic, but you might use it as the elastic that closes your entire TN. 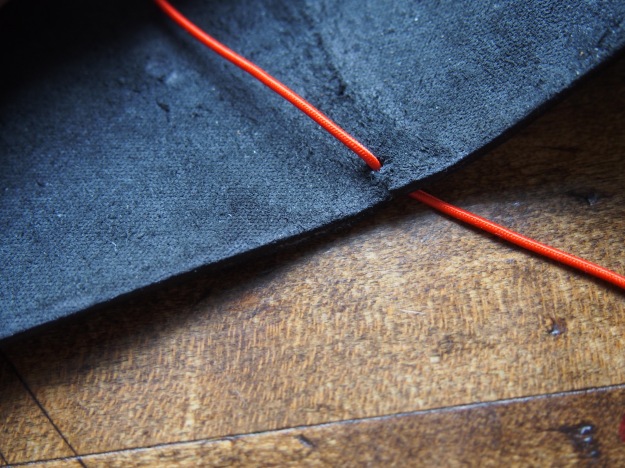 Step Two: Pull the elastic through the bottom notch, somewhere in the middle of the elastic. You can always pull and adjust if it’s not in the right place later. 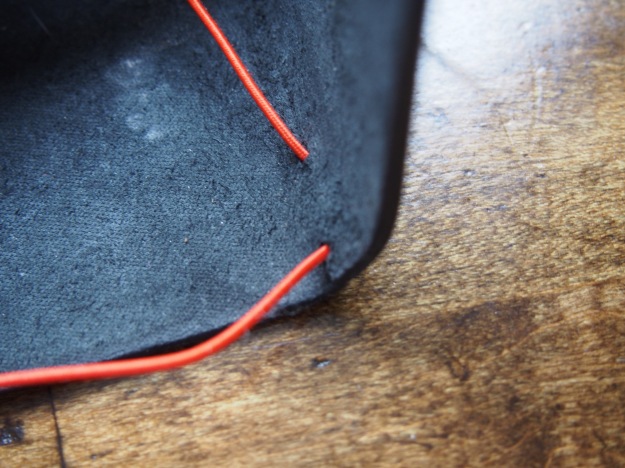 Step 3: From behind, poke the end of the elastic back through the hole into the inside of the cover. 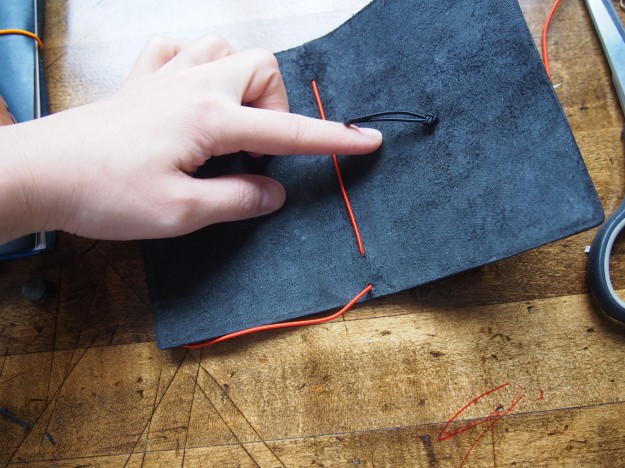 Step 4: Poke the elastic through the top hole, and draw it all the way through. 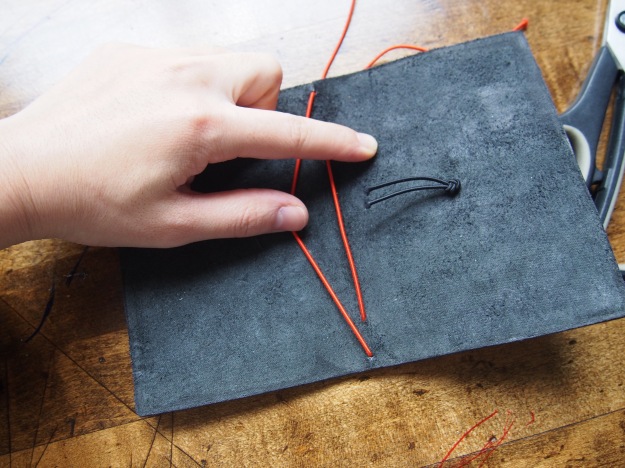 Step 5: Bring up the bottom end of the elastic and pull it through the top notch to the hole. Your notebooks will go between these elastics, so you can gauge how tight you want it. 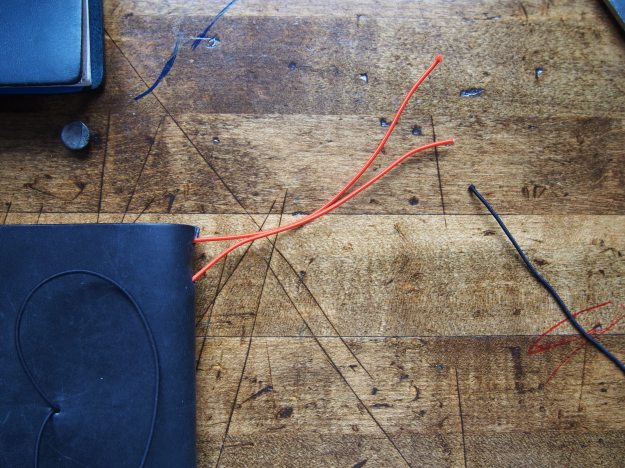 You will end up with elastics coming out of separate holes. Trim off the excess. 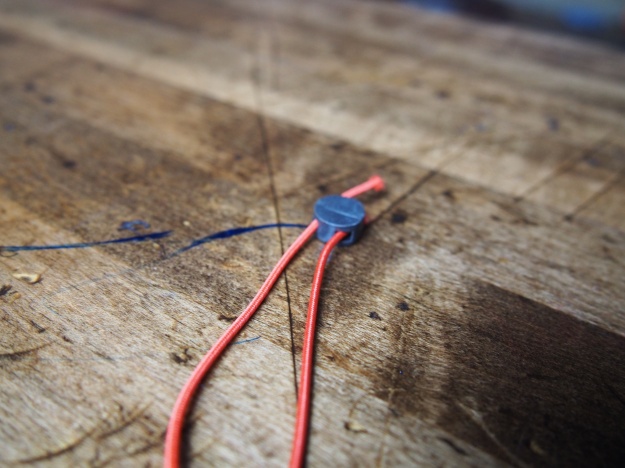 Step 6: Insert them into the two smaller holes of the metal enclosure (the wider end is for the knot, in the next steps). 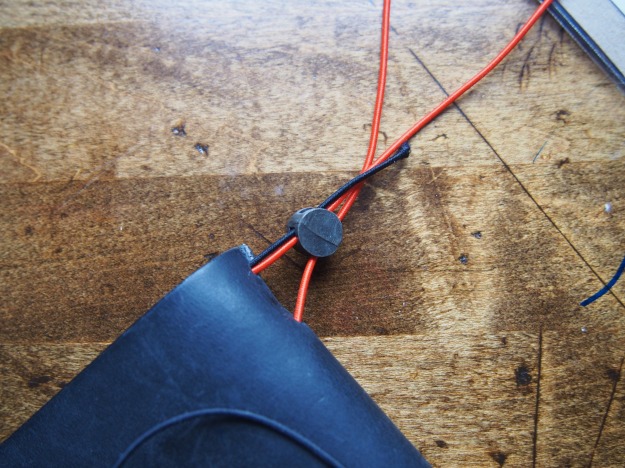 Step 6b (optional): If you’re going to include a page maker, now is the time. Insert it with the top elastic part, and through the same hole in the metal enclosure.

I used the leftover notebooks-holding elastic that I cut, but I’m not sure that’s the best move (sorry, Jon). The elastic is a bit bouncy, so it doesn’t just stay where you want it. It might be better to use some thin rope, or else weigh it down with a charm or bolt. 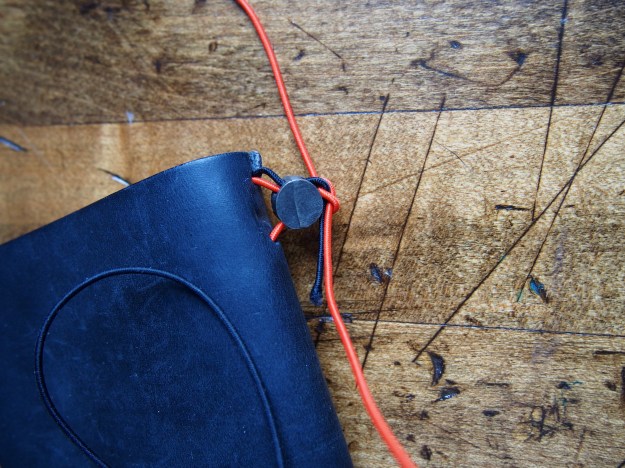 Step 7: Tie a knot. You’ll be able to adjust the tightness now. And it’s now or never, so take the time to make sure it’s how you like. Better to err on the side of tightness, since the elastics can loosen up over time, but if it’s too loose, you’ll have to re-do the whole thing. 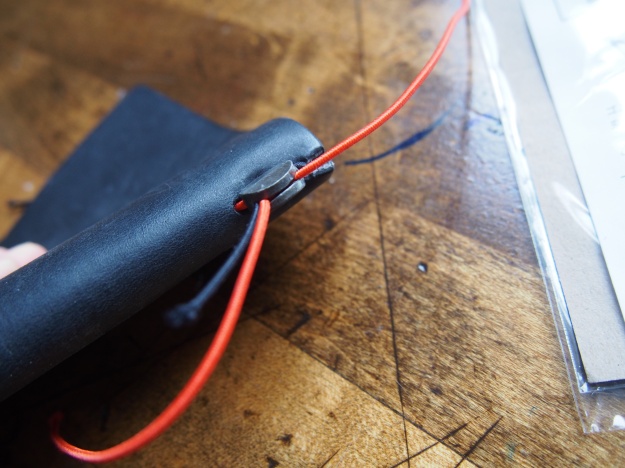 Step 8: Use a hammer to close up the metal end piece. This is pretty easy, just a few firm taps. 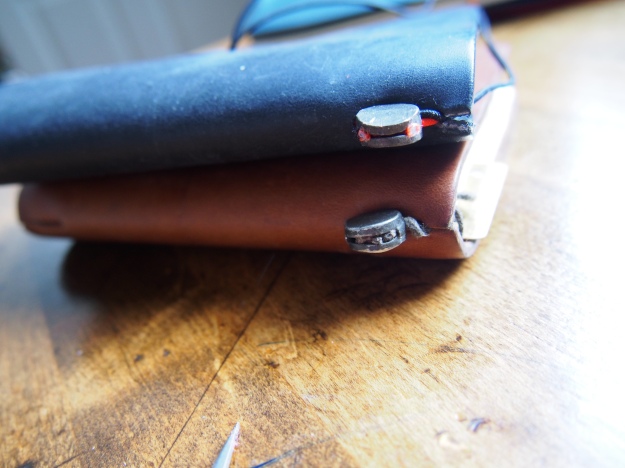 Step 9: Trim off the end pieces. I used a smaller pair of scissors so I could be a bit more precise. There is still a bit of the cloth bit of the elastic poking through, but I think those will naturally wear off over time.

Even though you may get a cleaner cut by cutting off the excess before you hammer it down, I don’t think I’d recommend that, because if the elastics pull loose with the ends to the knot cut so short, the whole thing will come undone, and you’ll need to start over with a new elastic. 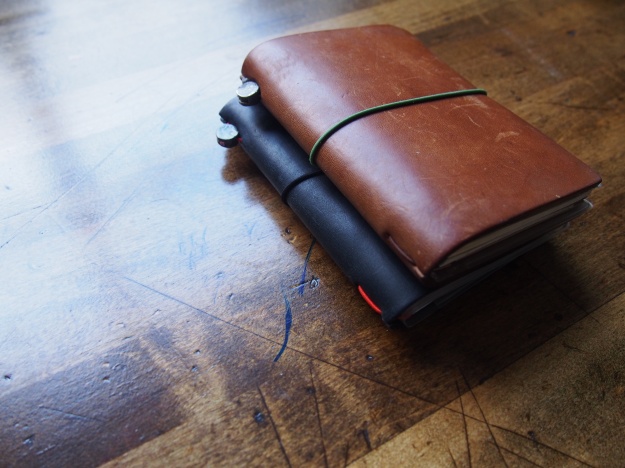 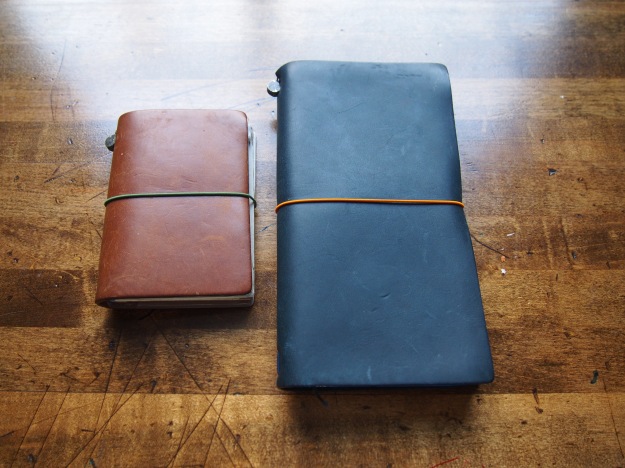 I’m loving it! I love the pop of colour on my blue Midori, and I also really like the hint of red at the bottom of Jon’s passport Black. Because the elastic closing the TN is so easy to change, I may even consider changing my blue Midori’s elastic to brown, for something a bit more subtle.

As always, we’ve been busy around here, packing up orders, saying hello to visitors and new folks trying out pens in the shop. We just got in our latest Field Notes’ order, including the winter special edition Snowblind, which changes colour from white to blue when you hold it in sunlight. I don’t know how they keep coming up with these ideas, those crazy folks at Field Notes.

I made my first Chinese-style steamed fish dinner last night, which also involved my first time gutting a whole fish in the kitchen sink. Let’s just say next time will involve a sharper kitchen knife, which I would’ve known had I watched the Youtube video before I did the deed. Here I was thinking this is one of those things that just come instinctively to Asian women in the kitchen.

I meant to write this blog post yesterday, and I wish I could say I had a good reason why I didn’t get it up, like we just got a big shipment in of something exciting, or I was fixing someone’s pen, or I was re-organizing all of our shipping supplies, but it’s really because I got in a box of washi tapes I’d ordered online the night before, and left it on my table. Caleb had pulled the box off the table in the morning, and I spent 85% of my expendable time looking for this one lost roll. I found it in Caleb’s “tool box,” which (joke’s on him) might actually be perfect vessel for holding washi tape rolls. Every cloud has a silver lining.