We have been “needing” a trip to Ikea for a long time, and with the bricks & mortar closed this week, we piled into our trusty/rusty two-door Civic, looking forward to the drive home, cramped into seats pushed all the way forward by long and flat cardboard boxes. I have been dreaming of Swedish meatballs and vinyl arrows on the floor for weeks.

We were almost going to go on a Sunday afternoon, but figured it would be less busy on a Monday mid-morning. Let me tell you, as we were leaving we overheard an Ikea employee talking to another co-worker, pushing a long row of shopping carts back into the building, “This isn’t even close, it’s going to be a stampede.”

And he was not kidding. It was nuts even as we were just leaving. I think it’s those meatballs.

While we shopped for some shop things and some home things, Caleb, of course, had the best time of all. 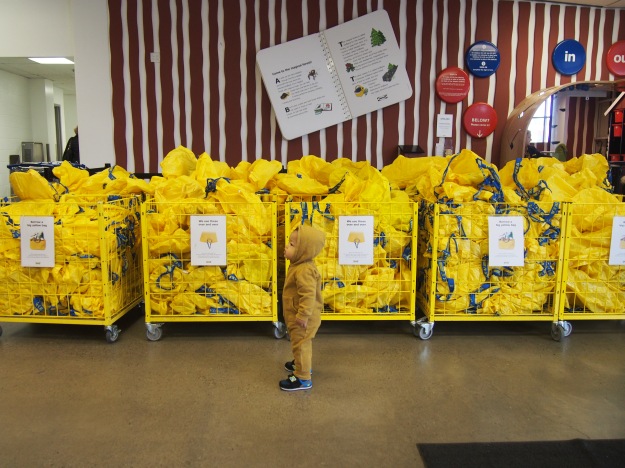 According to me, this was the first couch Jon and I ever had. According to Jon, “it doesn’t look familiar.” 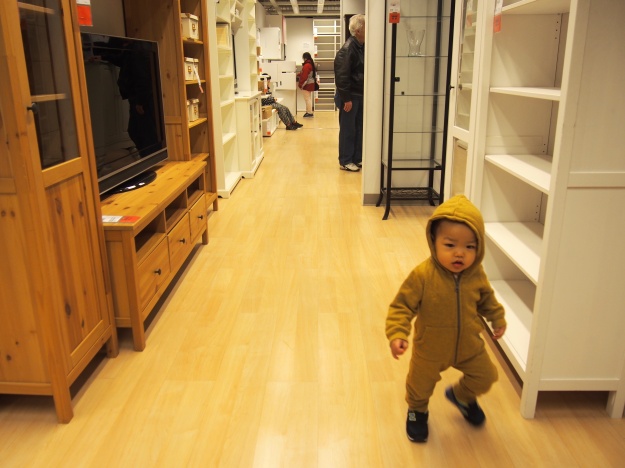 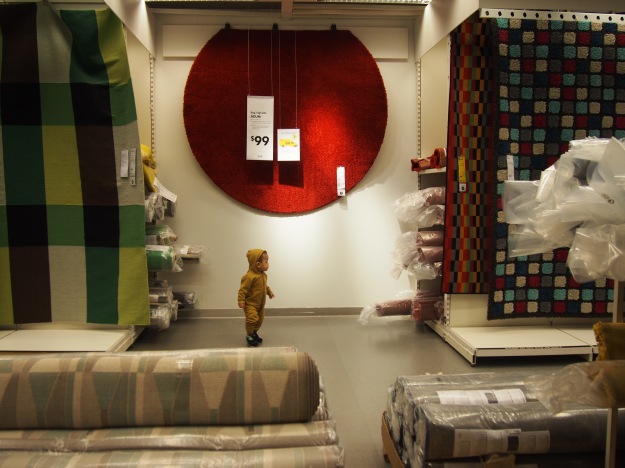 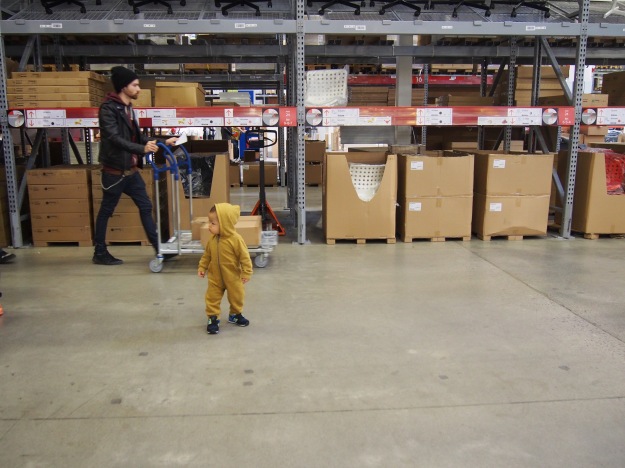 We had a list of a few things we needed to get for the shop, and also a kitchen cabinet for the apartment. When we moved into our apartment, there was literally nothing for a living situation: no stove, no fridge, no bathtub. We put in the essentials while the costs of renovation were giving Jon grey hairs, but I think we both agreed it was time for some cabinetry, mainly because Caleb grabs everything like he’s had never had any discipline in his life.

After it all, it was lunch time. I graciously offered to find a table while Jon lined up for our meatballs, and he came back to us like he had just been attacked by wolves. But it was totally worth it.

Best of all, as we were leaving we bumped into a few of our favourite customers! And they thought they could get away from us…we are like the mafia! Or high fructose corn syrup! Everywhere!

Just kidding. But we did seriously bump into two pen nuts and the dad of one of the pen nuts. I was almost going to take a picture of them, but I’m pretty sure they were there to admire the Swedish design and not to be ambushed by their local pen clerks.

Now, at this very moment, I’m watching my manly man assemble our new kitchen cabinet, while listening to such salty commentary as:

“How come I need all these other tools – this is Ikea, I’m supposed to be able to put it all together with an allen key.”
“There’s like 56 steps in this one, it’s going to take forever.”
“Ugh, I can’t find this piece, I think they forgot to include it.”
“This piece is left-over, I think they must have included extras.”
“Liz, I need your help. Don’t put that on the blog.”

19 thoughts on “Caleb Adventures in IKEA”