I had hoped to pop onto here in a more timely fashion (i.e. before Christmas had actually happened) to wish you all a happy Christmas or else just an extra happy Friday, but things got away from me a bit. We had started the holiday season ready to go! Pumped! Everything organized! Shipments coming in and counted! And we’ve ended it with half-empty boxes everywhere and scraps of recycling covering tables and Jon looking a bit scragglier than usual. Or, maybe about the same level of scraggli-ness. Tough to tell with the beard.

I’m sitting at my desk watching as Jon snoozes and Caleb snoozes, and I think Super is snoozing, but he’s been relegated to the packing area for his snooze because he keeps barking and waking up the baby, so I can only assume.

I hope you all had a great holiday. I hope your presents all arrived in time if you ordered them online. I hope your turkeys turned out moist and delicious. Or else, maybe you ordered some take-out, and I hope that was good, too. Jon has promised me one night of Indian take-out and Netflix this break.

Christmas was wonderful here! The actual Christmas celebration, not just the “holiday season,” although that was pretty great, too.

We’ve decided we’re going to try to get Caleb one gift for Christmas, and we hope it’s one he’ll like and use for a while. We’re pretty lucky to have lots of relatives and friends who give Caleb more than enough so we don’t really have to worry about Caleb being deprived, but from us, rather than maybe too much for his little brain to handle, just one gift that we think he’ll like.

Caleb is a very, very physical and coordinated kid – he is a climber and runner and explorer non-stop, and so this Christmas, we got him a pedal-less tricycle that turns into a bicycle, called a balance or a push bike, where the rider just uses his feet against the ground. I actually saw a kid on the sidewalk with one a while ago, and thought to myself that is exactly what Caleb needs. Something to make him crash even faster into boxes of merchandise.

We closed up the shop the afternoon of Christmas Eve, and we had a family dinner at Jon’s parents on Christmas Eve. We came home late to put the baby to bed, and then moved the tree from the shop to our apartment (Jon), assembled Caleb’s gift (Jon) and wrapped it (me!). Clearly we are not plan-aheaders here, and I had to unwrap one of Caleb’s gifts from his grandma to use the wrapping paper to make a bow for his bicycle. (Sorry, Lola! We wrapped it again in our boring brown paper).

Jon, fixing the lights. Caleb, watching, unaware that his gift is in front of him. This kid is going to get some fast ones pulled over on him. 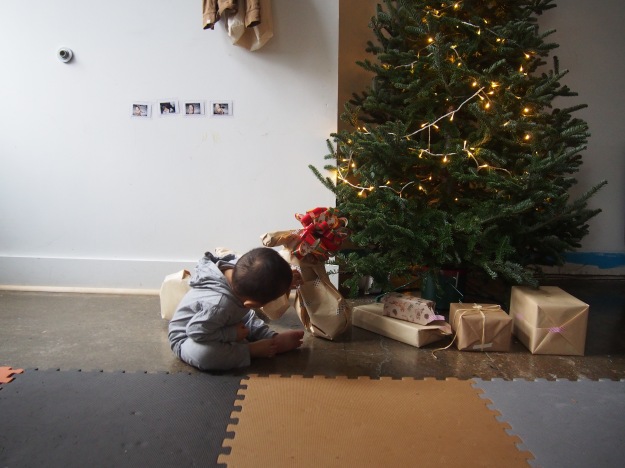 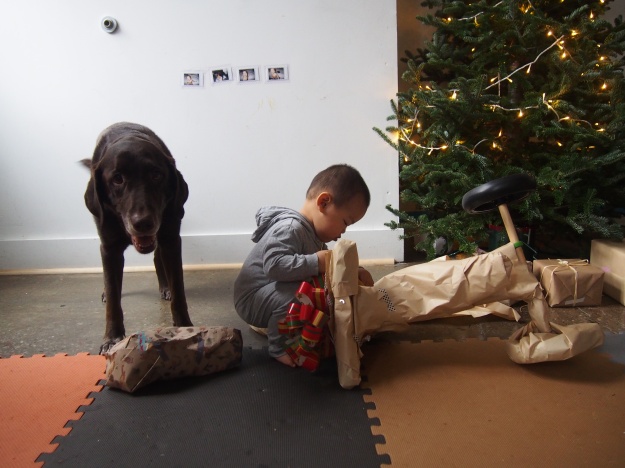 It looks a bit like he might be excited to learn that he’s getting a new tricycle, but actually he’s excited to see that the wheel turns when he spins it with his hand. 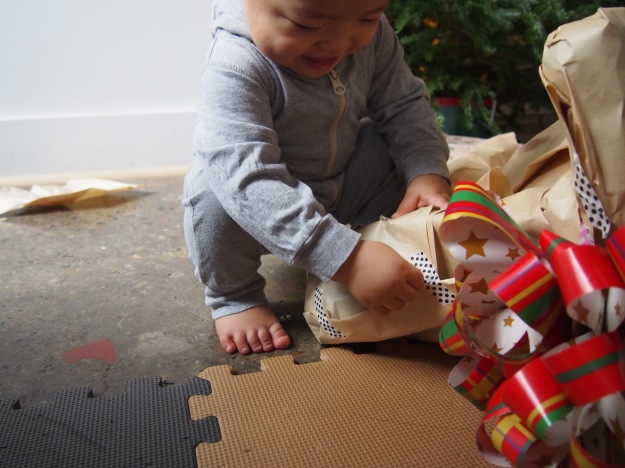 It got a bit boring after a while, because while Caleb normally seems to go after things with quite a bit of vigour, unwrapping does not seem to be something he really gets into. In fact, he is truly a mama’s boy, because I think he was more interested in the washi-tape.

With some assistance, the tricycle was unveiled, and Caleb has been scooting around on it ever since.

Caleb surprised me with how fast he picked up on this! He’s already had a few accidents, but I think he’s loving it. He keeps trying to bump into Super, which he thinks is hilarious, but Super is faster than him. I think Caleb’s actually moving a bit slower on the tricycle than when he’s running at full tilt, but we’ll see how he goes.

“These tight corners! How can you turn with all this furniture in the way, mama??”

“Get out of the way, you hairy beast! I’m trying to get out of here!”

“I need some help getting back on this thing. Immediately.”

Jon got a Pilot Murex! This is a now discontinued pen that he’s been thinking about for a long time. Jon is also starting his Instagram back up! He says he’s going to mostly have pen stuff, but he’s also going to try to work in some embarrassing pictures of me and the baby 😉

(He’s just kidding, because he and I both know full well that he doesn’t know how to cook or do laundry.)

However, I’m pretty sure I got the best gift of all! 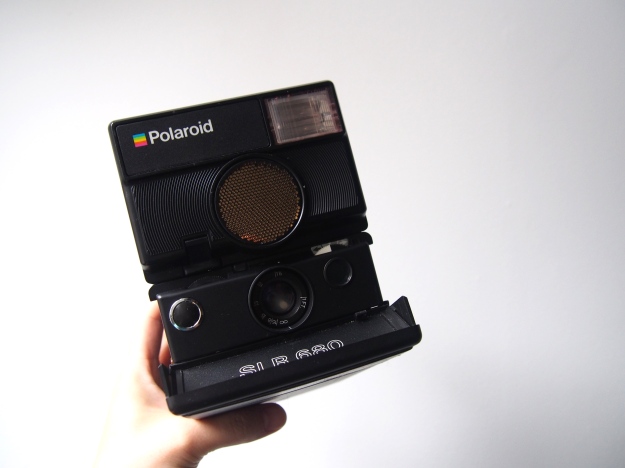 An actual Polaroid camera!! I feel a bit like a fraud since there are all these real photographer type people who have multiple cameras for different purposes, and I now have multiple cameras, mainly for fooling around and taking pictures of the baby and the dog. Jon said he got this one because it’s supposed to the best one for taking pictures in low-light, which is clearly some sort of back-handed comment on my lighting skills, but one I’ll overlook because now I have this crazy new camera!

The film is insanely expensive for this (obviously I didn’t know what I was talking about before with my Fujifilm Instax camera), so the pressure is on. When I’m taking a photo with this bad boy, everyone better be smiling and looking happy. And be perfectly centered. And have natural light shining on them.

We’ve been seeing extended family and Caleb’s grandparents over the last few days, but we’re mostly done with the driving and fancy dinners, which means we’re in our pyjamas all day, and joining Caleb for his afternoon naps.

So while the online shop is still open, and we’re packing up orders to ship out, our bricks & mortar will be closed until Saturday, January 2nd. We’ll be packing up orders and doing a bit of business-y things, although a lot of our vendors are also closed between Christmas and New Year’s, but we’ll also be doing some major cleaning & re-organizing, counting some inventory, and trying to jumpstart a few projects that have been kicking around. I have a few things planned for the blog, too!

We’re also planning on taking a trip to Ikea (Caleb’s first! Swedish meatballs or Ikea breakfast, who can decide?!), buying a soup pot so I can learn the ancient art of making Chinese soup (just add ginger), and possibly giving the dog a bath. Probably not on that last one – Jon and I have gotten really good at procrastinating unpleasant tasks, and plus I’m pretty sure the dog’s fragrant aroma is coming from his breath in any case.

The best part about my mom’s Christmas dinners is that we take home enough food to feed us for a week. Pyjamas! Tasty food that I didn’t cook! Naps any time of the day!! This is going to be one amazing Christmas break 😉 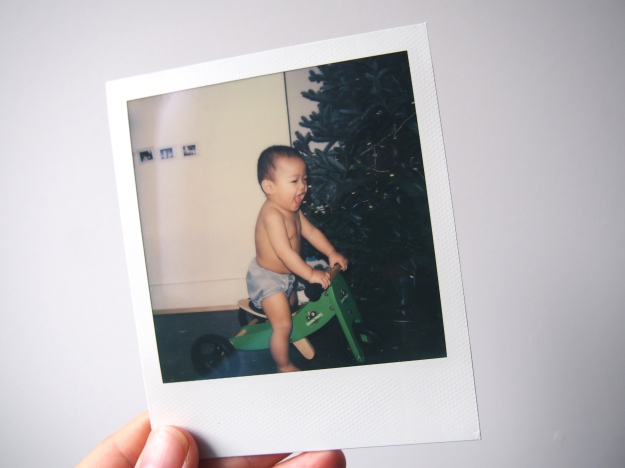 Caleb’s second Christmas (the first where he’s not a blob).

6 thoughts on “Christmas Behind the Shop”