Happy Friday! As always, we’ve been bustling here, and a few new products have been trickling through onto the website and in the shop. Caleb has learned how to climb onto chairs and then onto the kitchen table, so Jon has been hiding all of our chairs during the day. He’s basically smarter than the dog, now. I read that really intelligent dogs are a match for 2-3 year olds, but I think it’s official that our dog is not the sharpest extra fine point in the pen roll. He’s like a broad/double-broad.

I wanted to share a few snaps of some beautiful Diamine inks. This is all because:

We’ve not only restocked our entire line, we’ve also received just a few bottles of some inks we don’t normally carry to try out – we’ve got a small number of inks like Steel Blue and Bilberry, and also just a few of each of the 150th Anniversary Inks. The Anniversary Inks are in 40mL bottles, and are triangular, so if you get the whole set, it forms a delicious and inky pie.

These 150th Anniversary inks were actually released last year, and we’ve been ordering them as special order by request. I hadn’t had a chance to try them, and we figured since we won’t be ordering new Diamine in over the winter, we might as well bring in a few. I’ve heard good things about the Regency Blue, especially. These inks we won’t have on the website, but you can e-mail us if you are interested in ordering online and we can help set you up! Of course they’re on the shop shelves as well.

So, to celebrate all this, I thought I would share two beautiful browns in the Diamine line. I chose these two because they’re actually quite similar, with just a hint of a difference – the difference is enough to make both interesting, but it’s nice to be able to compare them together.

The first is Ancient Copper, one of our most popular Diamine inks in the shop. I must admit it took a while to grow on me, despite rave reviews from customers. I remember a customer once coming in and telling me that Ancient Copper was the ultimate ink, and then I think he bought two bottles. At that time, I thought I was more of the Ochre brown type, not the reddish copper brown type, but it turns out I am both. I am as surprised as you 😉 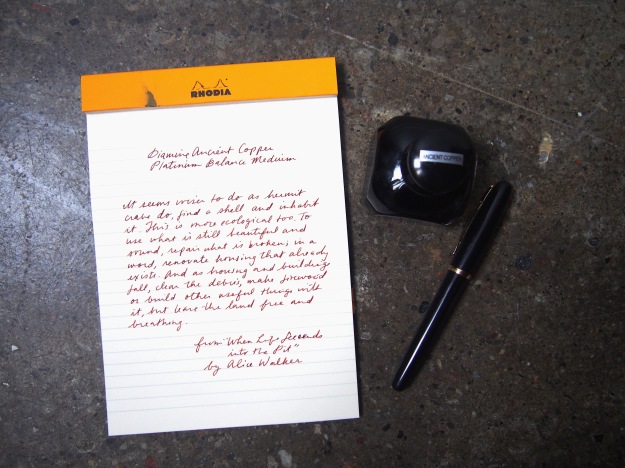 The second is one of the 150th Anniversary inks – Terracotta. 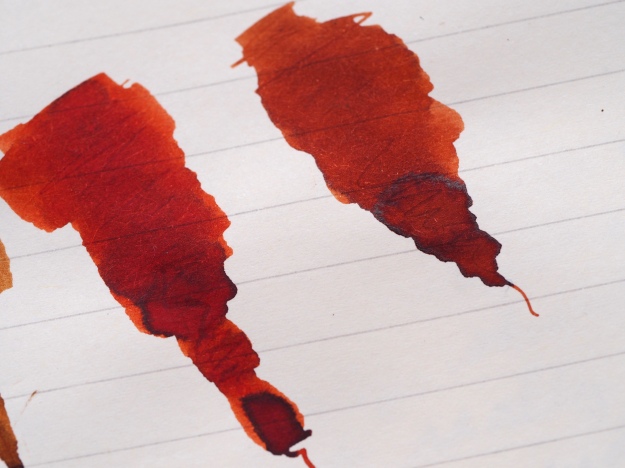 Diamine Ancient Copper on the left, with a bit more red to it, and Diamine 150th Anniversary Terracotta on the right, a bit more brown on the orange side. Both of these were done off the back of a fountain pen, rather than a q-tip.

These are two very, very similar inks! I love brown inks, so I’m all about the slight differences in shades, but these two are gorgeous browns. Both are amazing shaders, which is probably one of the most important qualities for me, along with both having good flow.

Neither of them are waterproof, and I do find that Ancient Copper gets a bit unfriendly if you leave it in your pen for too long. I haven’t had any problems with that long-term, as it cleans out pretty well, but I wouldn’t leave Ancient Copper in a pen that you think you might not be using for a while.

I must say though, if you’re not a real brown person, I highly suspect just one of these two may do for you. If it came down to a desert island, I waffle back and forth, and sometimes I think I might go with the Ancient Copper because it’s that rich, warm, sultry kind of ink, but then Terracotta has that really earthy brown thing going. I also really like J. Herbin Lie de the, which is a bit more of the grey brown, also very nice.

If you’ve followed along with our shop here in Canada in the past, you’ll know that we’ve run into some problems shipping Diamine in the winter. With other bottles, depending on the weather, we can siphon out a bit of the ink, and include it in a sample vial with your bottle, so in case of freezing temperatures, any expansion has room to go without breaking the cap or the bottle. However, we’ve found that Diamine just doesn’t do as well shipping in the winter, and we’ve had a larger number of broken Diamine bottles than all of our other brands combined.

We’re hoping to get another shipment of Diamine before winter comes. Our distributor will definitely be holding off, as they have to ship much larger and heavier boxes filled with ink that have a reduced chance of survival, but I mentioned before that it seems like Diamine has changed its bottles, so they may be stronger when we can pack them up singly. We typically wait until we get a few broken ones before we stop shipping them, so who knows – maybe we’ll end up shipping all winter!

As well if you’ve been following us for any length of time, you know we don’t normally do this, but to celebrate the coming of winter and Christmas and eggnog and the hibernation of Diamine inks, we’re having a sale! 10% off all Diamine bottled inks & samples.

From now until midnight, Friday, November 20th, EST, receive 10% off with the code DANCINGDIAMINE online, and you can also get 10% off in the shop. We’re in stock of all inks now, but if we do run out, unfortunately there are no rain checks.

(The 150th Anniversary inks are $15, and also eligible for the 10% sale. Unfortunately, since we ordered so few bottles of these, we don’t have samples available for them.) 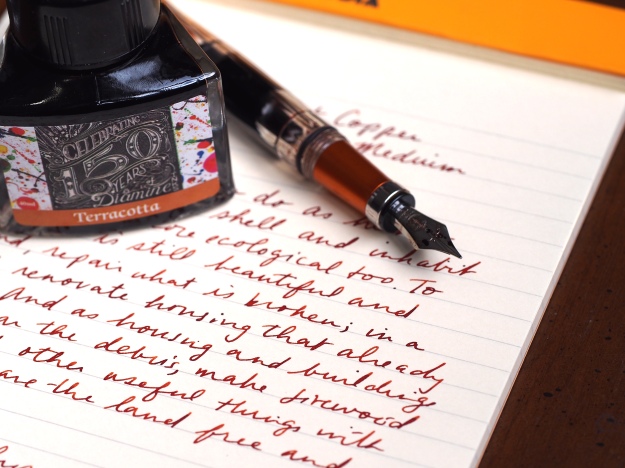