We just had our first Children’s Handwriting Class!

I think it was a success, but I think to really find out how it was you’ll have to ask the students (haha!). I guess I should’ve given them popsicles on the way out 😉

We actually had a waitlist of kids to come, so I think there are both parents and children interesting in handwriting. Even if you’re not interested in this whole “lost art” business, learning a skill can only be helpful to someone in life, especially something like cursive writing that aids in reading and writing. We were supposed to have a few more kids, but we had two cancellations at the very last minute, not enough time to contact our waitlisted kids. 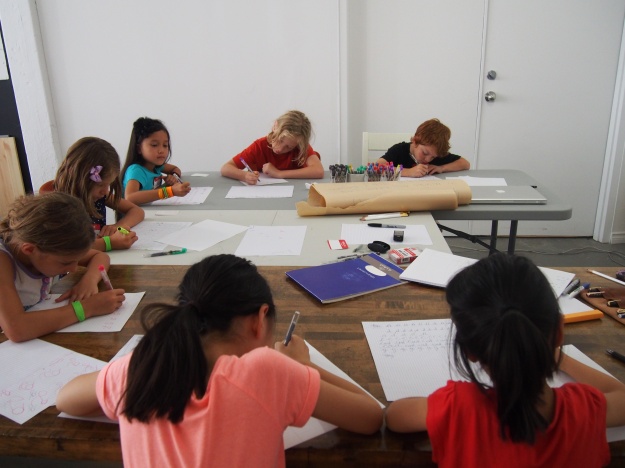 In case you have just started reading the blog, I used to be a public school teacher before we opened up the shop, so I figured I could handle teaching a small group of kids cursive writing. I thought I’d be able to ease back into the saddle, but it was totally different!

When I was a teacher, I sometimes reviewed or taught cursive writing, but only briefly, in late June after report cards had been turned in. In June of my last year of teaching before the business, I had the kids draw 3D or perspective drawings (which I had taught for geometry) on the top half of the page and cursive write a caption at the bottom. It was really interesting because the sheets where you have a blank top half for a drawing and lines for writing on the bottom are usually for much younger students, and you get the stick figures and crayons. When you looked at these kids’  sheets, though, you would have to do a double take because middle school students can really surprise you at perspective drawings – it’s a skill that can be taught. I wish I had kept a few of them to show you!

I actually would only spend maybe 1-2 class periods on it, which is around 60-80 minutes, and I would usually expect to be able to not only get through the entire alphabet, lower and upper case, but also have time for the kids to practise and review.

I think I grossly overestimated how much would get done with today’s class, mainly because some of these kids were still mastering printing and had zero experience with cursive. I had some other things planned, but I only got through a few letters of the alphabet! Of course the biggest difference is the age – I mostly taught middle school kids, who are around 12-14 years old, and this class was mostly younger students, around 7-9 years old. I also don’t think the class could be much longer than the one hour it is, as even with a break, an hour is a long time for a kid to sit and write.

I think in schools, if cursive writing is taught in Grade 3, they will do one one letter a day. Cursive writing is a skill that needs to be learned and practised. So of course, practically speaking, today was just a toe in the water.

So, there are a few things I think I’ll tweak for next time! Because I had such a range of kids, from kids that had not quite mastered printing, to kids that already knew how to form cursive letters and maybe only needed a bit of practice, for the next class, I’m going to be doing a more learn-at-your-pace style.

Kids that already know the basics of cursive can go on to practise the letters they have a hard time with or practise entire sentences or poems. Kids that haven’t learned any cursive at all can take their own time to learn each letter individually before moving onto the next one. Of course in order to learn cursive writing, it has to be practised regularly, whether it’s at home, or in a more formal setting like a classroom or a workshop like ours.

I’m still working it out, but there will be different rulings of paper rather than graph paper, more structured worksheets and folders, (optional) take home practice sheets and stickers! I have already broken out my old box of stickers from when I was teaching. Yes, even students in Grade 7 can get into stickers… although I think it’s the enthusiasm of the teacher that makes the students 😉

As we go along, I’d like to do a blog post on more practical tips on teaching children handwriting for you at home, especially if you don’t live in Toronto and can’t send your kids here. I think learning the skill of cursive writing is like learning to ride a bicycle, once you learn it, you’ve learned it. You may be a bit rusty if you don’t practise for a while, but you know how to do it, and you can pick it up again.

It’s important for the brain and hand connection, for historic and artistic reasons, for self confidence, for fine motor skills. There are a few studies that show kids with learning disabilities sometimes find cursive writing easier and better than printing – here’s an example from PBS – mainly because there’s a flow to the writing, rather than disjointed marks when you print and lift straight lines that need to be put all together into letters and words.

Our next class is going to be on Sunday, September 20, from 2-3pm! It will be free, and any new students will receive a Platinum Preppy fountain pen, although they can also bring whatever they’d like to write with. Old students can use their Preppy from their first class or they can also bring a pencil case or whatever they like. Rest assured, if students come to class empty handed, we’ll have something here for them to write with! Register by e-mail, phone or in shop.

I’m hoping to make this a bit of a regular thing, such as every third Sunday of the month, depending on if we get enough interested students to attend regularly. I think especially as kids are learning cursive writing, it takes regular and intentional practice, but of course it’s a time commitment to come once a month. It will still be free, and maybe I’ll even manage to haggle a calligrapher to come in and show off a bit for inspiration!

And just for fun, here’s a photo of Caleb after he dropped all the “Hello, My Name Is” name tags on the floor, 15 minutes before the class began. Obviously he is looking for his own name, while practising downward dog.