Sometimes we get asked about what the difference is between the Lamy Safari and the Al-Star. If it’s someone totally new, they might just not know that the Al-Star is more expensive because it’s made out of aluminum versus plastic which is the fundamental difference.

Even knowing that, though, you might asking why you would get one over the other. The short answer is that it’s mostly personal preference – both are great, reliable, durable, workhorse pens, and you can’t really go wrong with either.

The nibs are the same on both pens, so you can interchange those, along with the nibs on the Studio, CP1s, etc. – just not on the Lamy 2000 – so the writing experience will be the same. They also all take the same proprietary Lamy cartridge or converter.

The Safari models are above, and the Al-Star models are below. Each year, Lamy puts out a special edition Safari and Al-Star colour, and once those are sold out, they’re gone “forever.” Sometimes they bring them into their regular line if they’re really popular, like the Matte Black Al-Star, which was a special edition but now is available regularly. 2015’s Safari is the Neon Green (far right above) and Al-Star is the Copper Orange (far left below).

You might notice that it seems like some of the models are slightly taller than others, but it’s because the cardboard ring that prevents the cartridges from being punctured are in some of them, making them taller. They’re actually all the exact same height.

The Al-Star is going to be a touch heavier than the Safari, and I would say it’s noticeable if you’re paying attention. It’s not so close that you wouldn’t be able to tell unless you had them beside each other for comparison, but it’s not such a big difference that it becomes a deal breaker one way or the other.

Other than the material on the body, the next biggest difference is that the grip on the Al-Stars are all translucent and the grips on the Safari will all match the colour of the barrel. Both will have the same triangular finger hold.

The LAMY brand is in the same place and looks the same on both, except on the Safari it’s is debossed in, whereas on the Al-Star, the outline is engraved in. 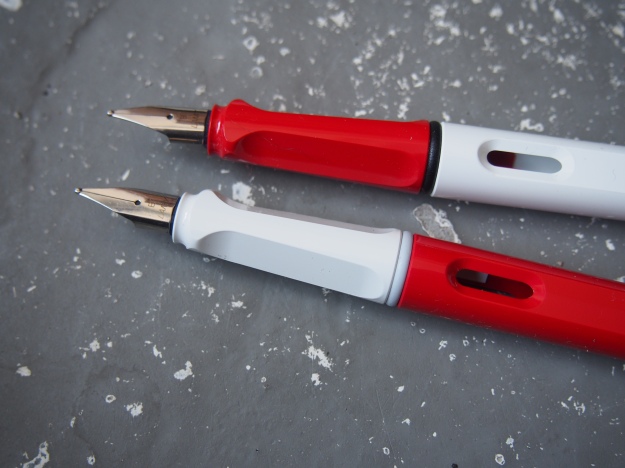 You can interchange body parts between the Safari models or between the Al-Star models, but not between the two. The Al-Star is slightly wider than the Safari, so the parts don’t quite fit, although they kind of do if you force it.

However, and more importantly, even if you mostly get the barrel on, the lid won’t close on it. The Safari has a washer on the grip to help the lid close in place, but the Al-Star has the plastic lip out of the barrel, so you’ll either have two plastic washers, or a gap because you won’t have any washer at all.

You can see in the bottom pen that the Al Star barrel has the black washer, and the Safari grip has the white washer, so there’s two, preventing the cap from closing properly.

Also, the ink window won’t line up, which is a bit of an irrelevant point since you won’t be able to close the lid.

I think the inside of the Al-Star is actually a plastic casing, which is why the tops of the Al-Star show a black plastic. Again, no impact on performance, just a fun fact.

Back when I was in the 906 shop full time, I kept all of the rings from people who purchased their Lamy pens, but wanted to fill them up in the shop. Obviously they didn’t need their cardboard ring, and usually they didn’t keep the box either.

After the baby, and Jon was in the shop more I discovered (gasp!) he was just throwing them out! Even though we run a pen shop, it’s harder than you think to collect these, because the vast majority of people who purchase a Lamy are…just taking the pen brand-new in the box with them, and not leaving their cardboard rings behind. Jon’s promised me since then he’s been keeping them. One day I may make a necklace or Christmas ornament out of all of them. I haven’t actually seen my collection since we’ve moved, but I think it must be somewhere…

So why would you choose one over the other?

For some people, it might be an aesthetic or feel thing – they prefer the look or feel of the metal or the plastic. Often the texture and look of the Charcoal Safari makes it very popular over the Al-Stars. It might be a colour that is available in one or the other, or they might like the way the colour looks better on either the plastic or metal.

Some people choose the metal because it seems like the metal will be a more durable material in the long run, but I think the plastic on the Safari will also be very, very robust and last a long time. It’s the same ABS plastic as LEGO, so you can be pretty confident you can toss your Safari at the bottom of your backpack or spill a bit of coffee on it. We had one customer who drove over her Safari, and it was still fine! I don’t know if maybe the pen happened to just fit into a grove in the tire, or what, but those Safaris are built to last.

Both the Safaris (except maybe the textured Charcoal Safari) and the Al-Star can be prone to a bit of scuffing and scratching over time, but the Al-Star may even get a small dent or two in the metal, and sometimes the scratches can be more visible because of the material – although this doesn’t affect performance.

Personally, I use both. I have a whole collection of Lamy’s, but right now I’m using the Neon Lime Safari. For me, it’s mostly about the colour of the pen, even though I really like the translucent section on the Al-Star. The translucence doesn’t tell you any real information, like if you’re about to run out of ink, but I just like the way it looks.

6 thoughts on “Lamy Safari vs. Lamy Al-Star – What’s the Difference?”