We had our inaugural Letter Writing Club here in the new space! To sum up: it was great and I can’t wait for our next one.

It was so wonderful to have a cup of coffee and a sit down with some of our favourite customers, long-time and new. We see some of you often, but sometimes it’s a quick chat over a few test pens or inks. Here we had an hour or two to sit with some tea and our pens scribbling on paper.

Some came for the entire time, some came just for half an hour or less, some came with a friend, and some alone. We had a few solitary writers, and a few who chatted about who they were writing to, and even someone who shared some historical letter sealing techniques! 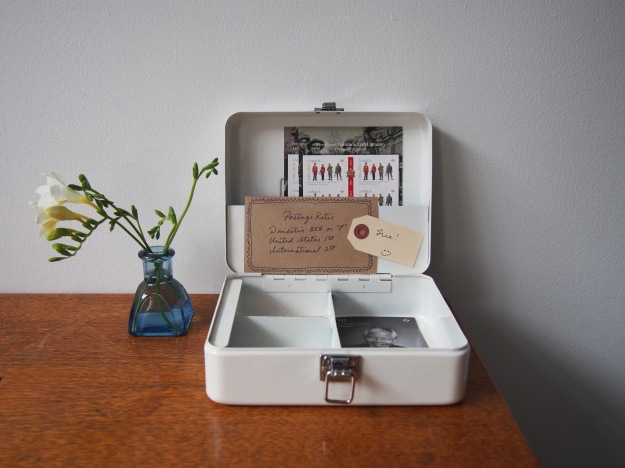 We had cookies (from Brick Street Bakery) and egg tarts and some sort of coconut pastries (from Chinatown) – and tea and coffee, of course. I was thinking of baking some banana bread, but it wasn’t in the cards for today – I would blame it on only having one banana left, but I think we all know it’s really because I wasn’t organized enough this morning.

Actually, I was in and out for a bit with the baby – he was napping for the first bit, but woke a bit early, I think because he suspected we were all having fun without him – but I had a lot of fun both chatting with some of letter writers and doing a bit of letter writing on my own.

We had to use chairs for our calligraphy classes, kitchen chairs, office chairs, a bench and our storage chest as a two-seater, but we had just enough, which was perfect. 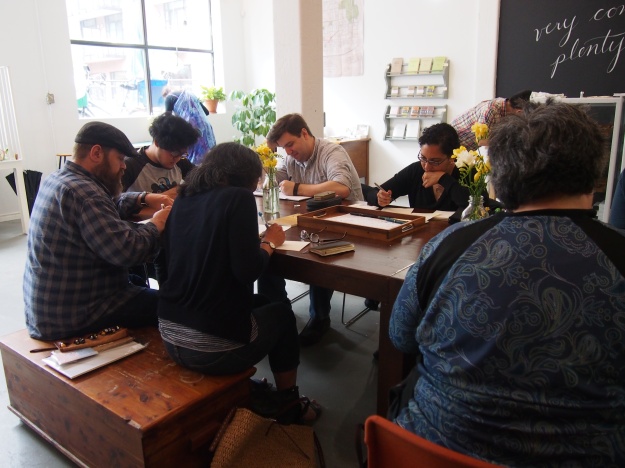 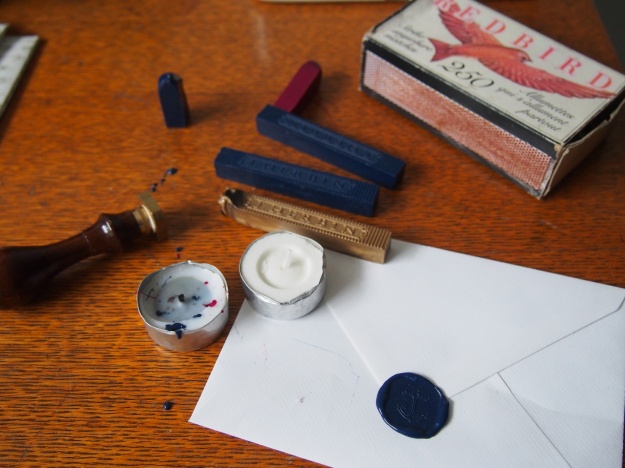 It was great to see so many people trying out the wax seals, some for the first time! It was also pretty cool to see some of the customized and personal wax seal stamps some people brought with them.

My favourite green chair! And also our storage chest with our winter blankets! 🙂

Towards the end, as I think most letters were completed and sealed up, it was nice to just talk a bit about who we were writing to and what pens we were using and just what’s going on in life. Just people with a mutual interest in taking the time to write and mail a letter to people we’re thinking about chatting over some coffee and egg tarts. In fact, we got so carried away with ourselves that we had a few folks staying until 5:00 🙂

And in the end, we had a nice little stack of letters waiting to head to Canada Post – letters to Germany, the Philippines, England, Australia, the US and all over Canada. I guess I send most of my letters within Canada, so I was surprised by how many international letters we had. 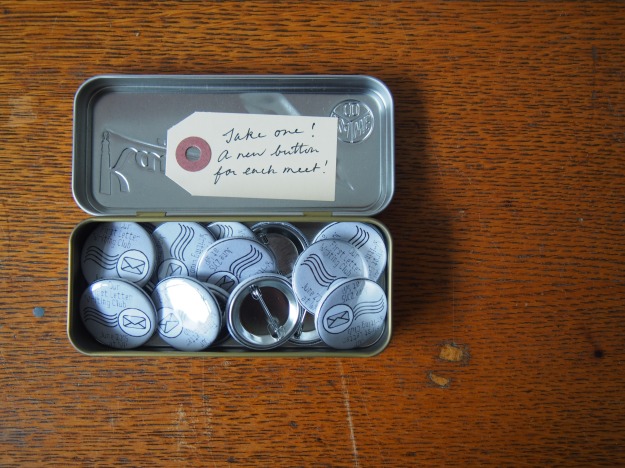 Best of all, I got to use my new button maker. Jon has been unimpressed with how long I’ve been spending, bonding with this little press. I admit, it’s taken me a while to print out the perfect prints for the buttons, especially because we’ve been having weird toner issues and it’s really hard to get the exact right circle size, but we had buttons! And we will have more for next time, too.

All in all, I’m so glad that we have this opportunity here to open up the space for some letter writing together. I know letter writing is a bit of a solitary act, but there is something kind of lovely about all of us doing this solitary act together. It was great to see those of you that could make it out here, and if you couldn’t make it today, maybe next time!