We’re settled into the new place fairly well now, although there are still boxes everywhere. I think the coffee machine being set up is the final step to Jon being home. I was going to take a few pictures of the cardboard box explosions of newspaper and clothing overflowing, but Jon said that’s a little too much of the sausage being made.

Baby is giggling in his bouncer and Jon is packing up the shop now, and it’s a little surreal to see this place with empty shelves.

But of course, we couldn’t leave this 906 Dundas West shop without a little celebration of its history for us.

As I write this, I’m sitting at the shop, behind the counter where I’ve spent so much time over the last two years. While this might be a symbolic place to write this post, it’s actually because the Internet at the new place is still getting figured out. It’s a real indication of our how dependent we are on the Internet and technology – we’ve been going a bit nuts trying to answer emails and pack up orders and get the blog going with connection cutting in and out, and moving like a turtle. I’ve got a few blog posts lined up, just waiting to see the light of cyberspace. Jon has been using some of his special words in sentences also involving the word “Rogers.” 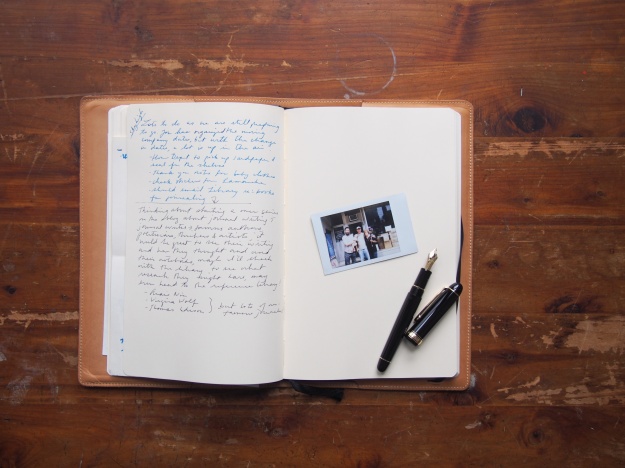 The story of how we finally lucked into finding a retail shop in Toronto’s real estate market is really a bit unbelievable. I think it’s every Torontonian’s pastime to haunt the MLS website, clicking in and out of neighbourhood maps, but between me and Jon, he’s always been the real estate guy.

Back when we were starting out, all we had was a bit of inventory, a few customers we were just getting to know, and certainly, a pretty small budget for a bricks and mortar shop. I was taking a leave of absence from my job, and we were taking a leap out into the world. While we weren’t exactly sure if this business was going to make it, we sure needed a place to try it out.

We had originally hoped to launch the bricks and mortar shop in July of 2013, basically as soon as possible after I began my leave of absence from teaching, so it was just a matter of finding the right space in the right neighbourhood for the right price. I was in charge of the pens and ink, but Jon on point to find us our shop.

He spent hours and hours on MLS, Kijiji, Craigslist and Spacelist. Commercial spaces on these sites are often listed and re-listed several times in order to continue to appear near the top of the ever-changing list of properties available. Whenever we drove anywhere, Jon used to zone in and out of conversation with me to focus on keeping his eyes peeled for properties that might be listed for lease, and we made our share of detours into parts of the city we’d never been in. He used to make me have my phone out no matter where we went, just in case I needed to take a snap of a phone number for him to call. But all to no avail.

Jon, demoralized, wilted and with glazed eyeballs, finally began to fade, and suggested we might need to push back our original timeline. Seeing Jon’s faith in the great Toronto real estate market beginning to crumble, I finally decided it was time to step in.

And what do you know, the very first day I took a look on Kijiji, we stumbled across 906 Dundas West. Jon couldn’t believe it, in fact, he was completely aghast that I found a property on Kijiji that he had never seen. On Kijiji, properties are often posted several times to gain as much of an audience as possible before the listing disappears, being pushed into oblivion by newer posts, but our tiny 906 Dundas was posted just once, and we caught it just at the right time before it faded into page 10, 11, 12…

There were no pictures of the inside, just the front, and and not too much description, although I can’t quite remember what it said. But the price was right, and the neighbourhood was perfect.

Jon set up the meeting, and we got all prettied up for the trip. Here we were, ready to jump at the chance for a space that was the perfect size for our teeny business of pens and ink. And it was just that, perfect. It was small and cozy and just this little shop on a quiet street that was everything we needed. In fact, during our very first visit to  906 Dundas West, Jon checked his phone, and we sold a Sailor fountain pen online. It was an omen.

Maria, our landlord, had owned this building for many years. Having raised her family in this neighbourhood and this building, she was now running a travel agency in the shop. She still lived upstairs and had her family and grandchildren visiting her often. Her son, Peter, had only listed the shop downstairs on Kijiji just once, Maria not being quite sure if she was ready to “retire,” or just take a step back from running the travel agency full time.

Just before we were going to sign the lease, Maria was going on vacation with her family, and she was still a bit hesitant about us, these two young fools, trying to start some stationery business. Peter suggested maybe after she came back we could look into it again. I laugh now, remembering Jon’s reaction: “What?? She’s…going on a cruise? Doesn’t she know that the entire future of Wonder Pens is in her hands and that I may possibly be having a panic attack right at this very second?”

Jon was too devastated at the possibility of losing this shop, and he mustered all the charm he had (no small task…) to try and convince Maria that we were serious and trustworthy and that these old-fangled pens were going be a business. I’m still not sure how he did that, but I think, after these two years together, we have made Maria glad to have taken a risk with us. 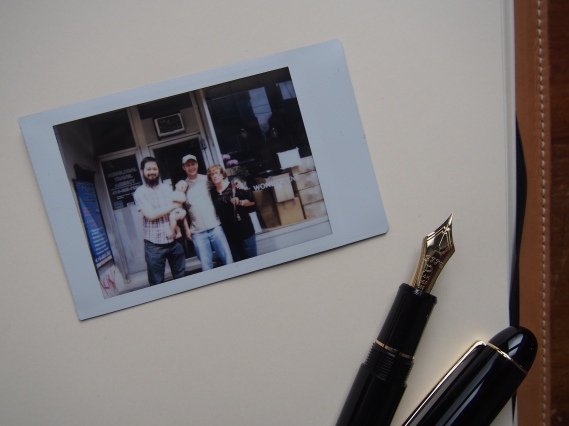 There are so many stories I could tell you about Maria and Peter. While this is his mom’s shop and home, Peter is the faithful son who helps and fixes and arranges everything. From our first meeting to setting up the contractors, getting fire and smoke alarms tested and helping us with the scary basement downstairs. Peter is the son who comes by with a rose for his mom on Mother’s Day, and who makes sure we have all the extra batteries and bulbs we need.

When we first opened the shop, Maria came down to buy a pen from us. She claimed she needed a fountain pen for just those right occasions, and ended up with a Lamy Safari, but I think she really just wanted to start us off with a token of good luck and support.*

After we had Caleb, I don’t think the grandmother in Maria could resist those enormous cheeks. When I had Caleb in the wrap, she used to peek in, I think only barely resisting that irresistible urge to grab those cheeks for a giant kiss. We have been the very grateful and fortunate recipients of knit sweaters and clothes and pants for the little tot, and I think he’s got more than his fair share of grandmothers. I think both Maria and I had visions of little Caleb growing up to totter around the shop as he grows up, but we’ve just run out of space here.

Maria is who we see everyday. It’s Maria who calls out when we’ve got our mail in, or who comes in to squeeze Caleb’s feet and give him a big smooch. It’s Maria who starts conversations with me in English and floats into Portuguese while I nod and smile. It’s Maria with the cake and the apple juice and the rosemary plant for good health.

She told me once that this building is good luck, and that there have been a few businesses that have gotten their feet wet here. In fact, the successful Portuguese travel agency next door started out in our space, but as they grew, they moved to the larger space beside us. Her family has grown up here, and her kids have gone to school in the neighbourhood. And while I cannot agree more, that this building has been good luck for us, I think it is also the people who have been very, very good to us.

The new folks moving in, George and Nastazia of 348 Studio, have a great new place, and we couldn’t wish them any more good luck for their business and family. Not that they’ll need it, because their designs and materials are gorgeous, but because we have been given so much ourselves.

*Incredibly, just the other day, she came down with her Safari, and told me that she wanted to get some more cartridges before we go, in case she ever ran out of ink. After two years, she has never once changed the cartridge. I popped in a new one, and it worked just fine. Those Safari’s, they’re like tanks. Two years, and it’s still working.