I’m sorry to say that there have been some unexpected delays. We had been keeping our fingers crossed, but I think that only works in the movies. I’m pretty disappointed with this, but we’re hoping it will all be worth it in the end.

We don’t have any firm dates yet, but the gist is we’re hoping to open the new store in late May, so we’re hoping to close May 16th, and plans to get up and running as soon as possible. The operative word here is “hope”, so everyone please do a rain dance for us. And if you come into the shop and you see Jon looking all mopey, you’ll know why.

The good-ish news is that the renovations on our apartment are moving along! The way things are going, it looks like we might move into the new space, and we’ll be doing a bit of back and forth across the city to keep 906 open while we work on the shop space.

This is the door from our apartment into the packing area and office. I had thought I wanted a larger double door, but Jon opted for a single door. Now that I think about it, that is probably a good idea: as a small business owner, the lines between work and home are pretty blurry, but we’ve been making it a priority to be home when we’re home, if you know what I mean.

Caleb is a water baby, he could spend forever splashing around in his baby tub and floating in the water. He even loves just watching the dishes being washed in the sink, although I have a feeling that will end once he is the one who has to do the washing.

The new apartment was originally a warehouse or industrial unit, so it’s been pretty insane trying to work out the plumbing and electrical to make it a live apartment. When we were working out the plans with the contractor, I had to work a bit of my magic to convince Jon that we needed to put in a tub in the new apartment for the baby. He rubbed his temples and said “fine.”

This is Jon pointing, and saying “This is where all the money is going: renovating the bathroom so Caleb can have a bathtub.” 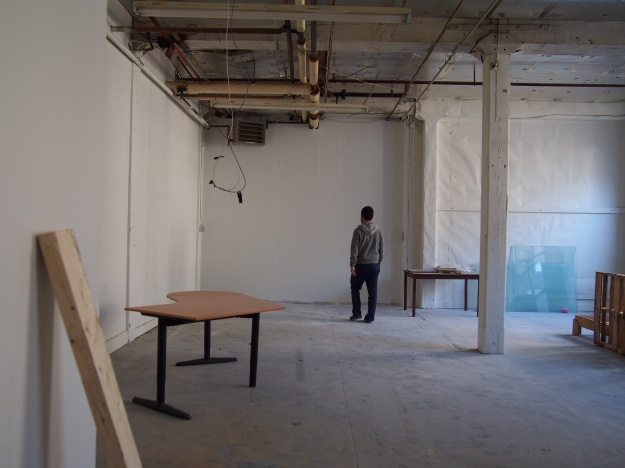 Jon going to check out more electrical wires from the ceiling. Just kidding, he’s checking out the drywall or something. 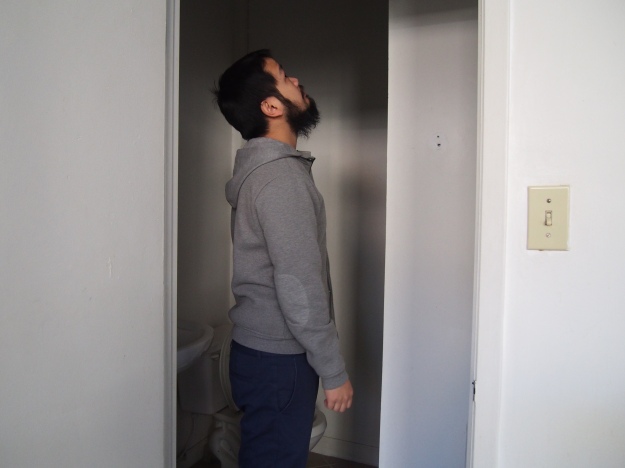 Jon looking around scary bathroom number 2. As we have no basement, I’ve offered this to Jon as his man cave.

We’ve been holding back on changing the date “just in case” a series of miracles all happened at once, but with contractors and subcontractors and building management and materials and delivery, it just doesn’t look like it’s going to happen on our original timeline. They say with renovations you should always add 10% to the cost and the timeframe, but man, those contractors are so convincing when they say, “oh yeah, everything will be fine…”

Thanks for sticking around with us. We’ll be sharing more news as soon as we can!