Noodler’s Inks are often based on historical or political events: one most well-known example is Tiananmen.

Tiananmen Square is a massive square in Beijing, China – a sure tourist attraction with Chinese nationals as well as those from other countries. Its political history as well as the beautiful structures around it make it a place you cannot miss if you’re traveling to Beijing. 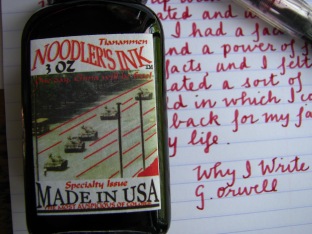 Tiananmen Square was built in 1651, but has been destroyed, damaged, rebuilt and restored many times along the way – from invading armies and countries to ambitious emperors. The structures around it, Tiananmen Tower (Gate of Heavenly Peace), are some of the most recognized images of Beijing.

The picture on the bottle of Noodler’s Tiananmen Ink is one of the most famous pictures of China, and its internal fight for democracy. The 1989 events in Tiananmen Square leading up to the photo center around student occupation in the square in political protest. As military tanks began to move towards the square, civilians were killed as they attempted to block the tanks. No one knows what has happened to the man in the white shirt, but he is now a recognized figure throughout Western media.

The ink itself is great.

The review was done on Rhodia 80gsm paper, with a clear Kaweco Sport and a B nib. 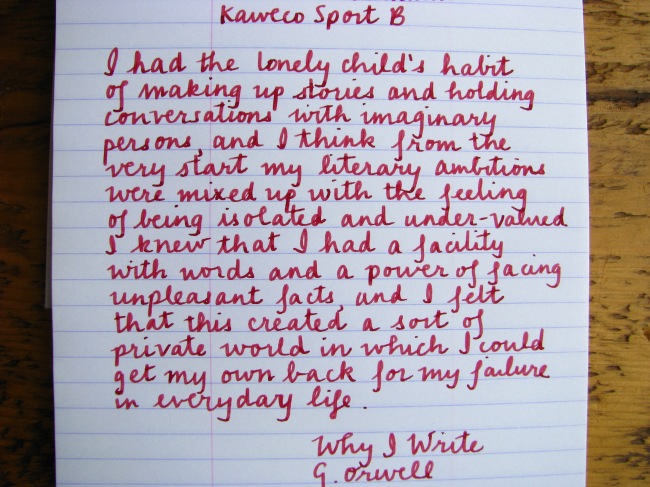 The ink is kind of a brownish, burgundy red – kind of like dried blood. It’s a darker red, with hints of purple and pink and brown. This is a slower flowing ink, so if you have a pen that writes a little too wet, this might be a good ink to try.

It’s a dark enough ink that you can write with this regularly, although I’m not sure if you want to bring a red to work unless you’re a teacher. That being said, it’s a great ink for teachers! It’s not too flashy, not too bright – a dark, warm red ink. Also, nice for a teacher, and other writers, is that this is a fast-drying ink. 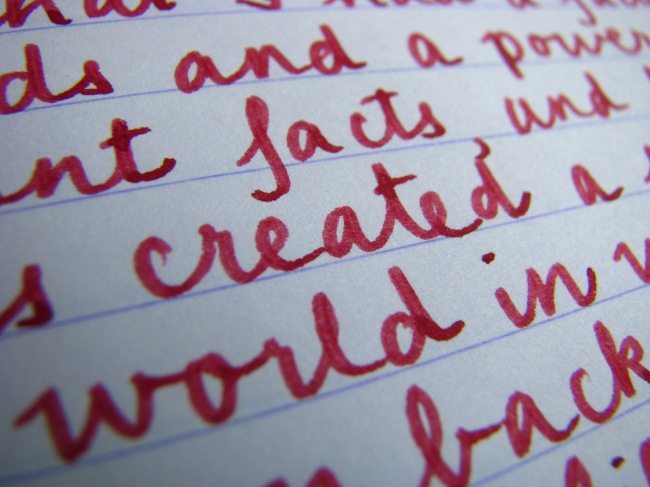 Some of the reviews I read elsewhere showed much better shading than I could get. I wrote with my Kaweco Sport B nib, which was a very even but slower flow – not too crisp. If you want it to run a little wetter, you can try adding a few drops of water. You can see hints of the shading in the close-up, but not as much as other people have managed to get.

Red inks and some Noodler’s inks can be particularly prone to staining clear plastics. If you’ve got a demonstrator pen you love or was expensive or is vintage, you may want to find a safe ink to use in it. The Kaweco Sport has had Tiananmen in for about a week now, and as far as I can tell, it doesn’t look like any staining has happened, but I’ll be able to tell better once I clean it out.

If you do have a demonstrator with some staining, I would not recommend using rubbing alcohol or chemicals. There’s often a kind of coat to the clear plastic, and when you use rubbing alcohol it can actually leave your plastic looking cloudy or permanently scuffed up. Try using a bit of dish soap and water, or a drop or two of ammonia. 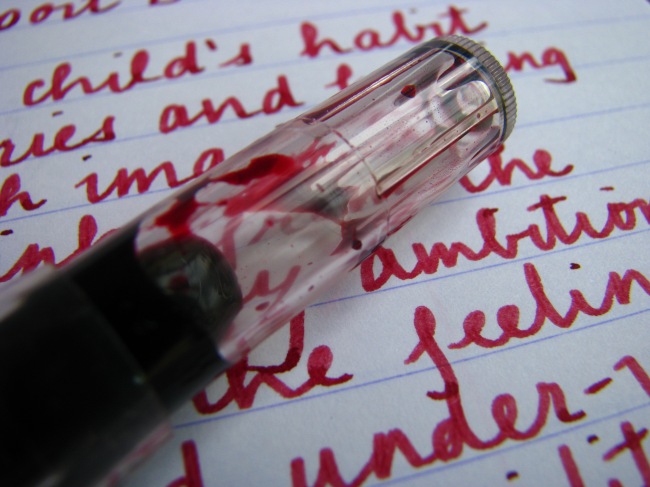 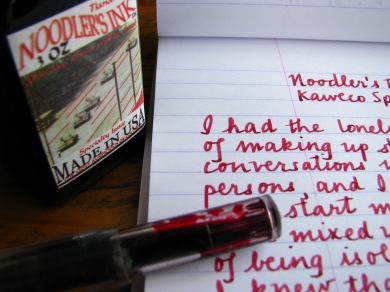 For other reviews, please go to: